We went to East Side Show Room on Saturday, and I immediately fell in love with the place. I walked in and was instantly reminded of Duck Fat in Portland, Maine, which I love. 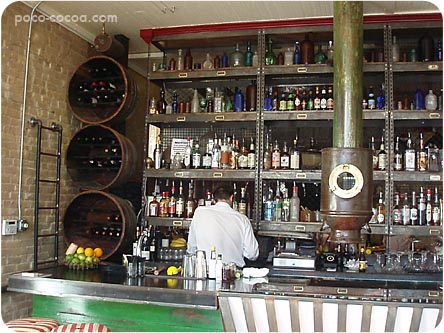 The Show Room is gorgeous… all of the metalwork was designed by the owner, Mickie Danae Spencer. There were gorgeous chairs and stools, architectural details, and super cute tables, all created by her. 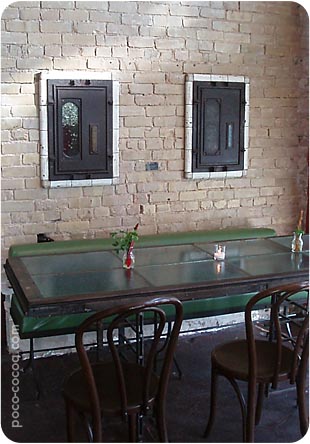 Our tables were adorable… one was black and white tile, and the other was a mosaic of pennies (is that legal?). The centerpieces were stalks of Swiss chard… a beautiful use of something that’s usually tossed in the compost bin. Beverages came in tiny mason jars. 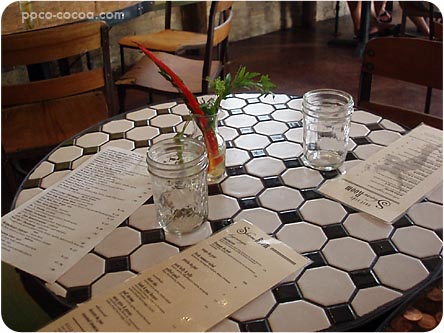 There were such great details… the chandeliers were both rugged and pretty, and above the bar was an I-beam on which the daily specials were written with chalk (below). You can also see the cubbies above that, which were filled with candles. The barrels on the right actually serve as a pass-thru from the kitchen, where drinks are placed for waitstaff to pick up. 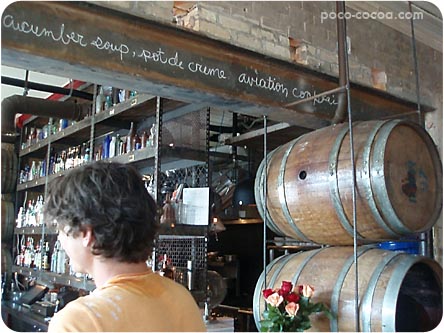 The Show Room will feature local artwork on the walls as well as live music in the dining room. There’s even a lovely patio out back.

Because I was so in love with the atmosphere, I hoped fervently that the food and beverages would be good enough to merit return visits…

We tried several drinks… my Pink Pony ($6) was a refreshing mix of gin, Aperol, cucumber and grapefruit juice. (See the pennies embedded in the table?) 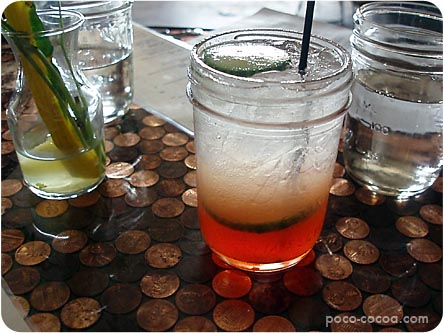 I wasn’t as fond of Rachel and Logan’s drinks (though you’ll have to check with the couple for their own opinions of their beverages)… the Framboise Flip ($8, in the tiny glass on the left), a mixture of bourbon, framboise, peach bitters and egg white was a bit… medicinal. Creamy and tasting of raspberry, but not necessarily a great mix of flavors. The Anejo Manhattan ($10) was made with Corzo Anejo, Carpano Antica Formula, bitters, and mezcal cherry. We agreed this needed some work; especially for a drink in which the base alcohol has been switched out. Drinkable, but not wonderful. 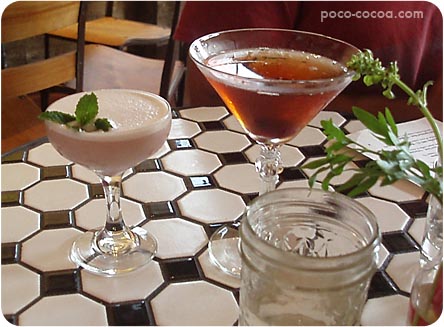 Rachel’s El Diablo ($6, 100% Agave, lime, cassis and ginger beer) was pretty tasty. It had a great ginger flavor, probably because of the Show Room’s use of Maine Root ginger beer (yum). 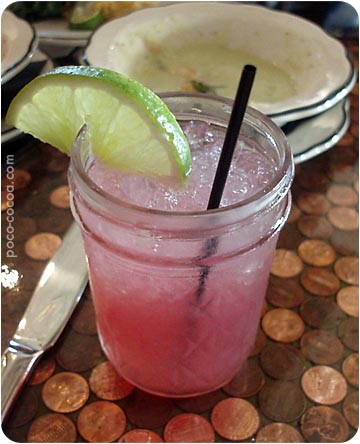 I decided to be brave and try the Zanahorita ($8), a sort of margarita made with reposado tequila, carrot juice, and  cilantro agave, with a Turkish salt rim. Aside from being incredibly gorgeous (look at that ice cube balanced on top! so pretty!), this drink was amazingly good. If I ever had doubts that carrots could be part of a great cocktail, they are now gone. 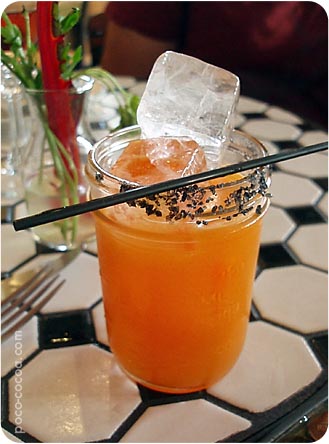 (If you’re wondering why Justin’s cocktails aren’t shown, it’s because he chose a beer. The beer menu is actually pretty interesting, with what looked like many different small batch beers, though not many local ones.)

The Show Room sources much of its food menu ingredients locally. This chalkboard up front (above more amazing metalwork) notes which ingredients come from which farms. Because the ingredients vary from week to week, the menu will be constantly changing. 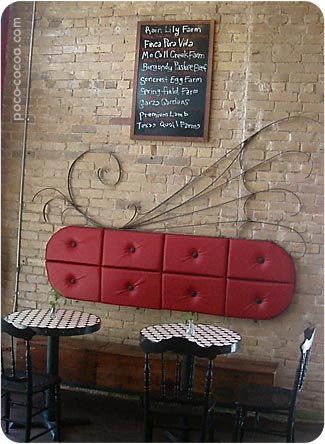 We decided to order a few things and share them: soup, a gratin, and a plate of greens and grits. 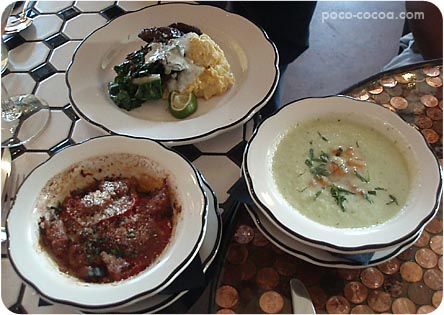 Here’s where my complaint lies: I know that the food is sourced locally. I know that it’s “gourmet.” All of it was really tasty. But these servings were quite small, especially for the price. Perhaps it’s just hard to accept that the price for local food is so much higher; they just seemed a tad too high for me. Example: the lamb and goat burger, listed as an entree, was $11; the serving we saw come out of the kitchen was one slider. Pretty steep, and probably not very filling.

Ah well, on to how the food tastes. The soup du jour ($6, bottom right) was a chilled cucumber soup topped with shrimp. The flavors were well balanced and not overwhelming. The gratin du jour ($7, bottom left) was made with tomatoes, onion and housemade chicken sausage. I loved this dish… the tomatoes really had flavor; I wished I had a hunk of bread to use to get the very last bits of tomato juice from the bowl. The curry grits and greens ($9) were great… the greens were perfectly cooked, and the dish was flavored with curry, coconut, lime and mushroom. We asked for a fried egg on top ($2 extra), which somehow didn’t make it out on the first try, but when the chef (Sonya Cote) brought the fried egg out later, she explained that she would normally plate it differently, perhaps leaving off the lime and adding tomato, when the egg is added on top. 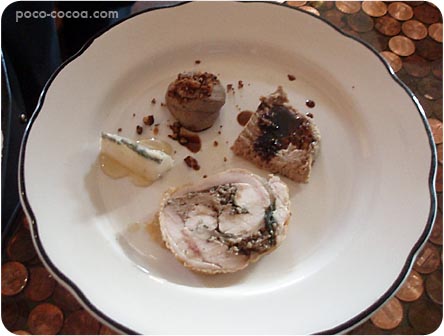 On the left is Hopelessly Bleu cheese from Pure Luck Dairy, with a bit of honey (delicious, of course). On top is a bourbon chicken liver mousse with candied duck bacon… very rich (I’m not a huge fan of liver), and well-liked by others at the table. On the right is pork rillette topped with an ancho chile sauce… I loved this. Super flavorful, and the ancho chiles were a great complement. At bottom is the “meat of the moment,” a chicken galantine with liver mousse and shiitake mushrooms, which was pretty tasty.

So the food was yummy, if scarce… we ended up heading to a taqueria and fruteria afterward to fill our tummies a bit more.

Would I go back? Definitely; though I probably wouldn’t go for a full dinner. I might get a cheese or charcuterie plate, cocktails or wine… and enjoy the gorgeous surroundings and live music. The Show Room is only open from 5pm to midnight, so it’s a bit confusing… it feels like a cafe, a hangout, a place to get a glass of wine and chat. But the menu and hours point more toward high-end dining, a place to have an intimate gourmet meal. I would really enjoy it more if there were more shareable plates, more snacks and nibbles. I should also note that when we visited, the Show Room had been open all of one week, so I’m sure things can only get better from here.

One response to “Tasting Austin: East Side Show Room”