I write this post with fear in my heart–fear that my friend Lindsay might kill me for trying this place without her. Just wanted you all to know what risks I take for this blog. Also, I apologize for the quality of the photos; the lighting wasn’t photo-friendly.

Last night our friend Jeremy invited us to dine with him at Nu Age Cafe, a new-ish vegetarian restaurant in West Austin. We arrived at 8:30, just a half hour before closing time, but were greeted warmly and given a comfortable booth. The hostess set the (huge) menus in front of us, and we studied them for quite a while before deciding what to order. 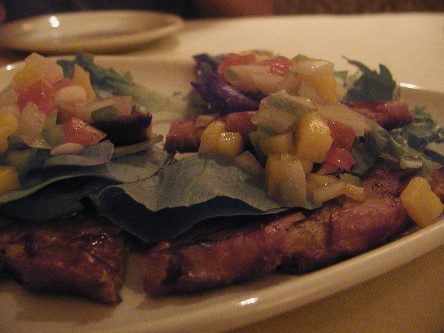 The food is mostly Asian-inspired, and the drink list is tea-heavy. We decided to start with the Scallion Mango Pita, pictured above. The “pita” itself was flaky and had a potato-flavor; it tasted more like a potato pancake. It was wonderful topped with a colorful mango salsa, the sweetness of the mango balancing out the saltiness of the pita. 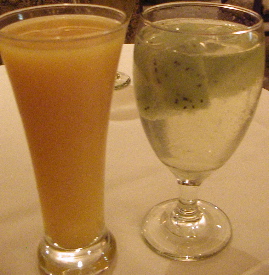 Justin and I tried a couple of interesting-sounding drinks, shown above. I had the seasonal fruit juice, which (according to our waiter) was a mix of orange, peach, and apricot juices. It tasted to me more like a creamy orange juice, possibly with peach and apricot nectar added to it. I was a little disappointed with it. Justin tried the Kiwi Sparkler, which was basically Sprite with frozen cubes of Kiwi puree. The first taste was disappointing (“Oh. It’s Sprite.”), but as the kiwi puree melted, the flavor was much improved. 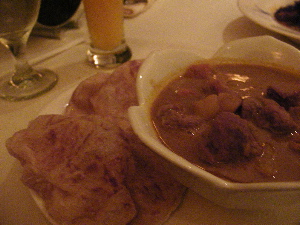 I chose the Malaysian Roti Prata (shown above), described as “soy morsels simmered in coconut curry sauce, served with roti.” The “soy morsels” were quite large and chewy for my tastes, but the sauce was amazing. It was full of soft potatoes and carrots, and had the creaminess of coconut milk to balance the spiciness. The roti was very tasty and interesting. The best way I can describe the texture is like this: Imagine those super-flaky canned biscuits, baked to perfection. Now imagine taking the top and bottom crunchy layers off, and you’re left with soft but flaky layers of biscuit. This was the texture and flavor of the roti. 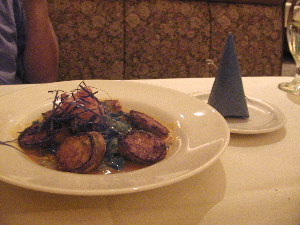 Jeremy chose the Thai Style Bean Curd Wraps (shown above), which were wrapped in nori and served with a sweet and delicious tamarind sauce. Jeremy enjoyed the sauce much more than the wraps, and decided that this was not his favorite dish from Nu Age. We all loved the uniqueness of the brown rice wrapped in a banana leaf that was served on the side. 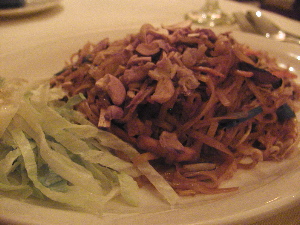 Justin had the Nu Pad Thai (shown above), which was tasty but unsurprising, your basic pad thai.

We didn’t have room for dessert, but I was interested in the Nu Age Chocolate Cake, a whole wheat cake served with fruit sauce. I would like to go back to taste a few more dishes, and I enjoyed the beautiful presentations and friendliness of the staff. The prices ranged from $10 to $15 for entrees, and they offer $6.95 lunch specials. We all agreed that the decor seemed a little odd, as Jeremy describes, kind of like an Indian restaurant that is trying to be classy, but still serves a buffet. The music was horrific, a mixture of Chariots-of-Fire-type songs with flowery, fairyland flute and harp songs. By the end of the meal, we were ready to leave just to escape the music.

It’s nice to have another all-vegetarian restaurant in town (it makes ordering so much easier), and it’s only a few minutes from our home. I don’t think it will become a regular stop for us, though. Final thoughts: Nu Age Cafe is worth a shot, but I’d stay away from “soy morsels.”