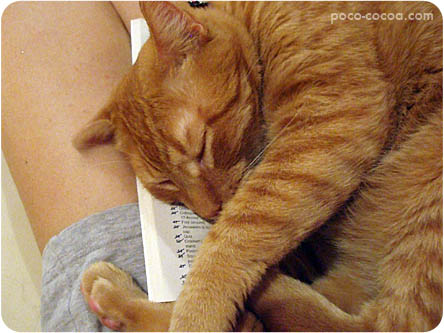 This week has been kind of a dud for recipes…we’ve made a few that I’ve already posted once before, so nothing new to share. I’ve also been a bit crafty, but I can’t show it to you until maybe next week. So it seems that I’ve been unproductive, but really, I’ve been busy!

Aside from job interviews and applications, I’ve been visiting friends. My friend Shara and I chatted over tea in her new house, and yesterday my friend Grit introduced me to bubble water, (carbonated water), apparently all the rage in Germany, her home country. She actually has this little machine in her kitchen that will turn regular old water into bubble water in just a few seconds. It was fun to watch.

Of course I’ve been reading (Prodigal Summer, by my current favorite author, Barbara Kingsolver), and attempting to do crossword puzzles…but it’s difficult to accomplish this when your kitty-cat decides that the book in your lap is the perfect spot for a nap. How can you say no to that cute face?

We did end up attempting to watch Elizabethtown, but after about half an hour, we both were so bored that we decided to fast-forward through the rest and make up our own storyline. It’s possible that the movie actually improved toward the end, but we just didn’t have the patience to wait it out.

Of course I was glued to the television for Project Runway on Wednesday night, but was disappointed with the gimmicks of bringing back unskilled designers and crazy ideas like “you have to use every bit of fabric.” So silly. I’d like to rent the first season, as I’ve heard that it was much more about actual design rather than drama. Of course, I’ll finish watching this season, simply because I’m interested to see whether Michael kicks butt in the end.

I suppose I’ve dragged this nonsensical post on long enough. Does it seem to the rest of you that the whole of blogworld is also in non-blogging mode? Some of my favorite blogs seem to be so busy living life that blogging, or crafting, or cooking has taken a back burner. Which is a good thing, I suppose. With that thought, I’ll let you go back to your own wonderful life. Happy Friday, everyone!