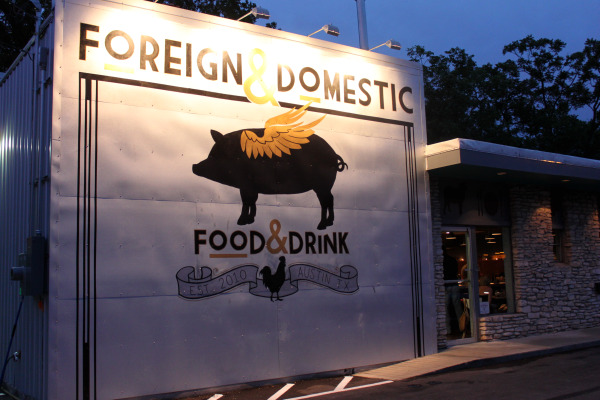 We had dinner with friends at Foreign & Domestic, and it was so very good! It’s such a tiny space… a few small tables and booths, and some seats at the bar. I liked the pillows along the benches… it helped soften things up a bit (both physically and visually). (Everybody say hi, Chad!) 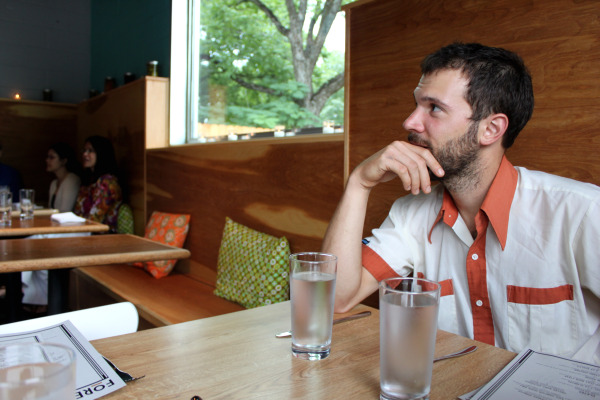 I was pretty excited about the menu. Such interesting options! The beverage menu was pretty small, with a few well-chosen wines and beers, and two cocktails (one made with wine, the other with beer). 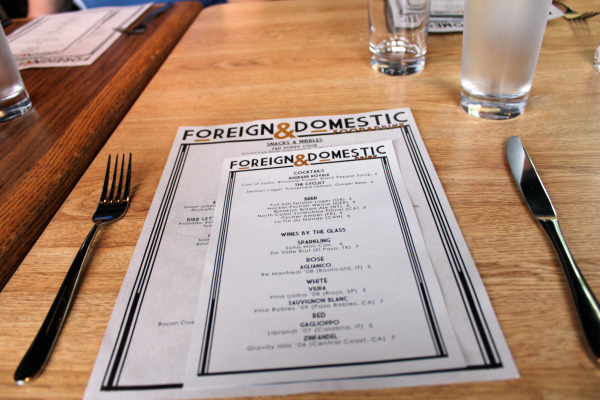 Justin tried The Cyclist, made with Session Lager, preserved lemon, and ginger beer. I’m not a big beer drinker, but this was seriously good. It was light and refreshing. And pretty. 🙂 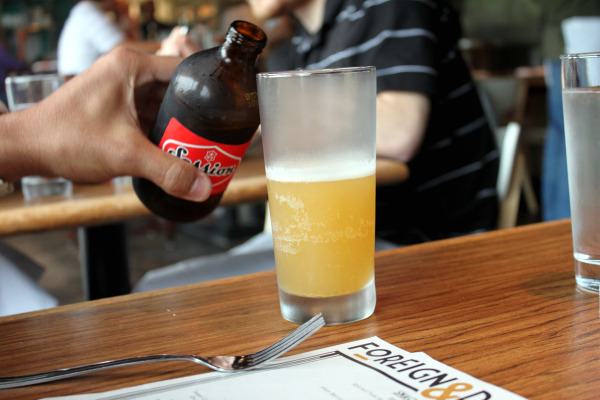 I tried the Rhubarb Royale, a can of Sofia (sparkling white wine), rhubarb puree and black pepper syrup. It was lovely, though I didn’t taste the pepper at all. 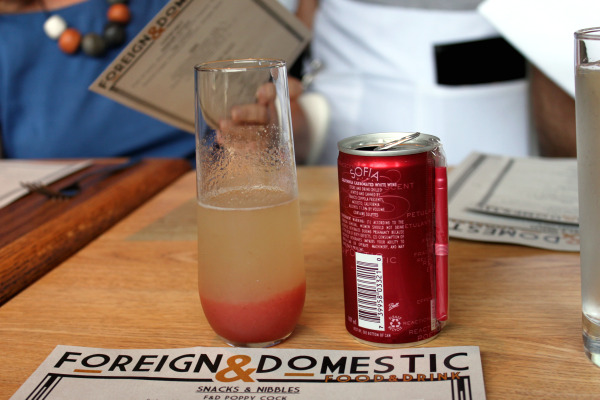 We ordered a ton of food… Justin and I did some heavy eating. Our four other tablemates were much more modest in their choices. Crazies.

On the right, That Beautiful Ass: Allan Benton’s country ham, stout mayo and grilled bread. This ham. Was. Amazing. And so perfect on those buttery toasts.

On the left, Popovers: black olive and gruyere. These had the perfect texture… they were huge, too! We used them to sop up dressings and sauces throughout the meal. I’m not a big olive fan, but these hardly taste of olives at all, so I loved them. 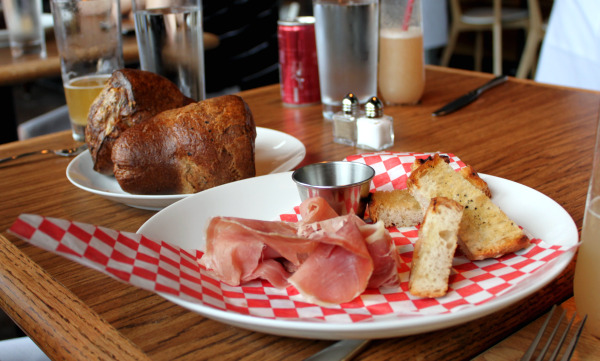 Almost Summer: sweet greens, artichokes, grilled peach, rhubarb and champagne vinaigrette. Linds ordered this, and let me have a nibble. It was lovely. 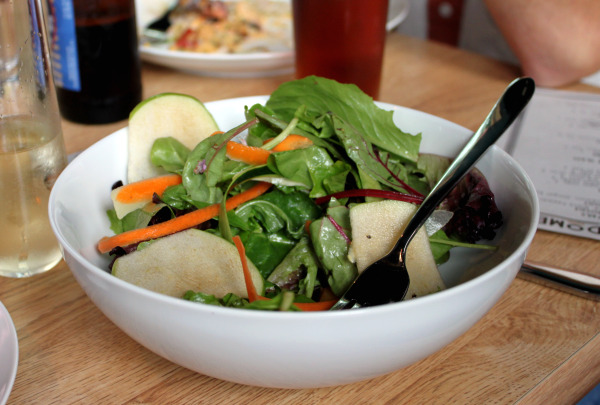 But most importantly, a (very) soft egg hiding in the middle. Heaven. 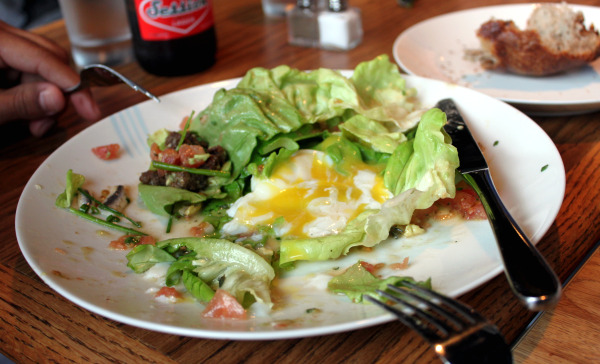 Garlic Broth: with toasted baguette, yolk, boudin blanc and pistachios. This actually came to the table with the toasts balanced on top of the bowl, and the perfect egg yolk on top of them, but there was a bit of bumping and it all fell in. It’s still pretty, though, isn’t it? The garlic broth actually tasted like a corn broth to me, rather sweet, and the crispy bread and egg yolk were so dreamy. The bites of boudin were nice, too. 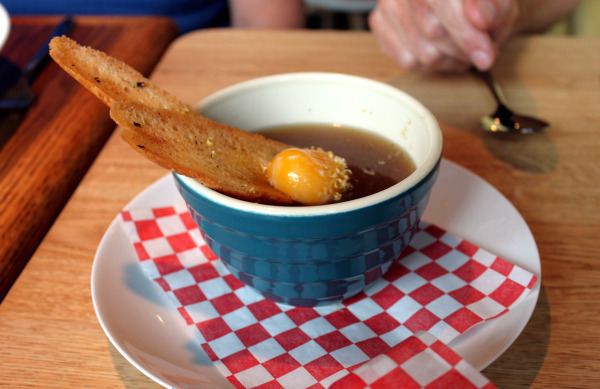 Grilled Baby Octopus: with chickpeas, almond milk, shattered garlic and pistou. Chad let me taste this, and it was mighty tasty. Our waiter let us know that tonight’s octopus was not a baby, but a grande, and it was a bit chewy, but still flavorful. 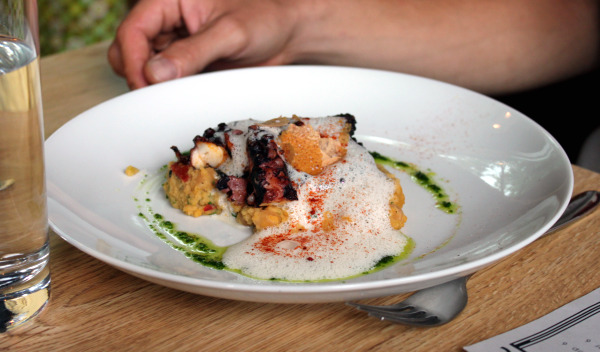 Corn Ravioli: with ricotta, tarragon, artichokes and cob broth. I ordered this, and it was okay, but I didn’t love it. I felt kind of bad, because everyone else loved it. I suppose I expected something different… I wanted the corn to be stuffed inside the ravioli; I wanted the pasta to be floury al dente Italian pasta, but it seemed more like a waxy steamed dumpling; I wanted everything to meld together into one cohesive dish, but I just kept tasting all the individual ingredients. Still, like I said, everyone else loved this. 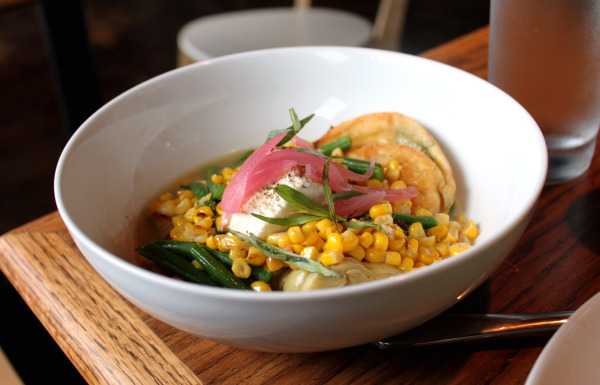 Scallops a la Plancha: with grapes, cabbage, filberts and black butter. I am so utterly sad that I forgot to try this. Chad offered me a bite, but I was too busy with my own plate, and now I’m filled with remorse… it looked amazing, and Chad raved about it. 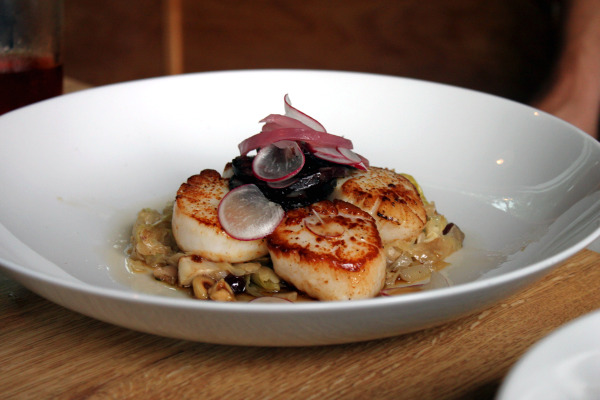 The Ripper: bacon crusted sausage, toasted pullman bread, tarragon mustard and bread and butters relish. Justin ordered this, and while we both thought it was stupidly delicious, it was also very rich. He wasn’t able to finish all that sausage and bacon… I think we’d share this next time, or split it with others as an appetizer. 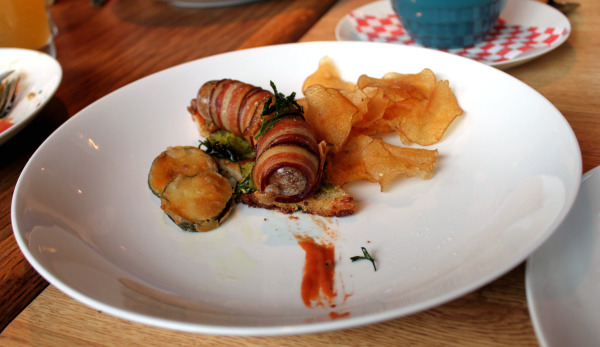 Vegetables a la Psaltis: with fried pickles, herb broth and ricotta toast. Linds thought this was really good… it seemed a lot like my corn ravioli, sans ravioli. 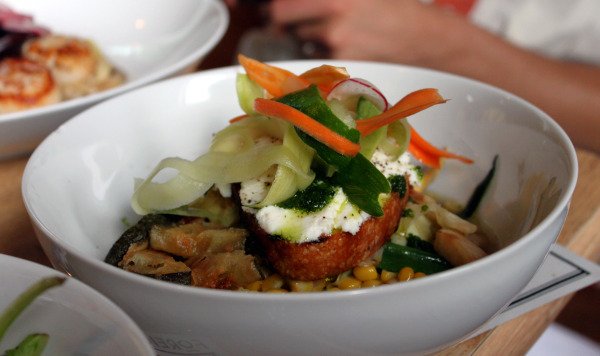 Justin ordered a coffee (no cappuccinos and such, just coffee), and it came in this cute paper cup (called the Anthora). Our waitress told us about this little cup’s history in NYC, and how the man who created it back in the ’60s, Leslie Buck, had recently passed away. It’s so cool when even your cup has a story. 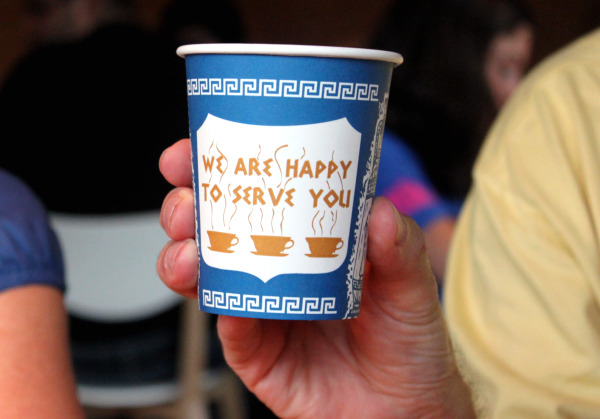 Of course we ordered desserts.

Frozen Blondie: with cherry ice cream, smoked almonds and chocolate. I liked the cherry ice cream on this, but I forgot to get a taste of the blondie. Justin liked it, though. 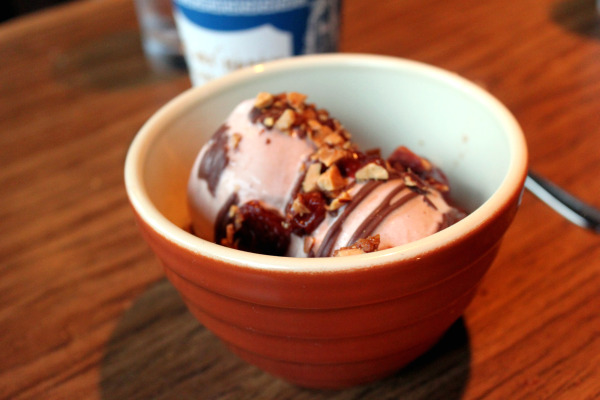 Vanilla: vanilla cake, rhubarb float and lemon verbena. I tasted this, but I actually don’t remember what I thought of it. Was it forgettable? Maybe. I didn’t get to taste the uber-cute rhubarb float, though. 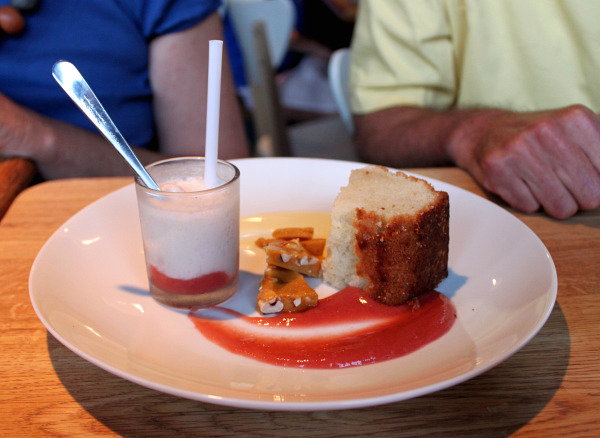 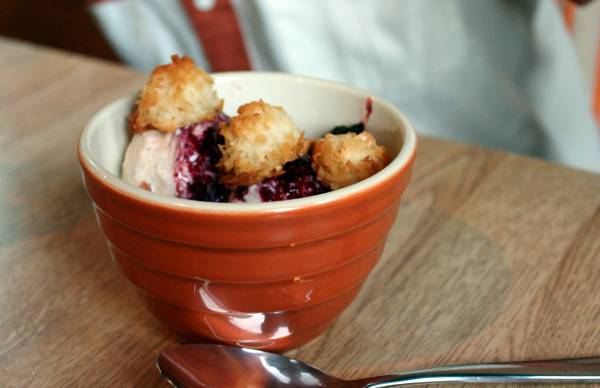 But my hands-down favorite dessert (and thankfully I ordered it, so I was able to eat the majority of it) was the Eat a Peach: peach tarte tatin, basil snowcone and sweet cream. So simple… the peaches were ripe and delicious, the tart crust flaky, the basil ice a perfect complement. Also, it’s pretty. 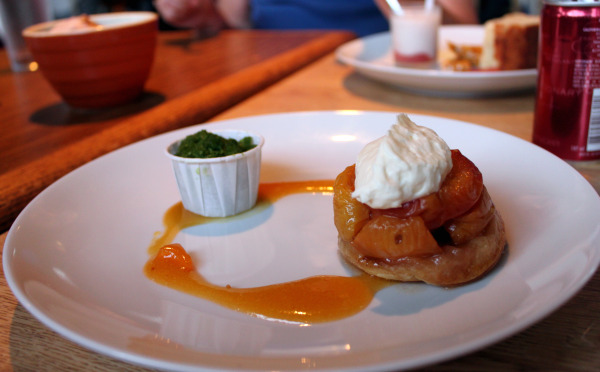 So folks, that’s what we ate. I would definitely go back, and order a few things we missed (and definitely the bibb lettuce and the peaches again). I’m anxious to see how the menu changes seasonally; with such a small menu, I would like for it to change regularly so you have more options. I’m not done with this menu, though… there are still bone marrow croquettes and flat iron steak and chicken with corn pudding to be had. 🙂