I’ve found my new favorite Austin restaurant: Uchi. I had avoided it before because it was described as a sushi bar, and for a while we were vegetarian. Then I sort of forgot about it and ruled it out as an expensive, pretentious place. I’m not sure why. Of course I’ve been reading about the accolades that executive chef Tyson Cole has been receiving nationwide, and it made me interested in seeing what he could do. So last night, Justin and I decided to try it out. Now I want to eat there every night.

The building is gorgeous, with a well-designed outside seating area and complimentary valet parking. The hostess said there would be a 45 to 60 minute wait, and we decided to stick it out. We sat in the bar and ordered some drinks to start, a glass of champagne for me and a bottle of Asahi Black beer for Justin. The bartender was extremely nice, giving me samples of different champagnes so I could choose my favorite. As we sipped our drinks, a hostess stopped by with a platter of grapefruit segments with mint-sugar…I am not a grapefruit fan, but these were amazing. We were only there for 10 or 15 minutes before the hostess found us and said she could seat us at the sushi bar. There are a few seats at the sushi bar, and regular tables as well, but I have to say, eat at the sushi bar if you get a chance…it’s a much more interactive and laid-back experience.

Our self-proclaimed “Sushi Girl,” Erin, gave us some tips on the menu, pointing out a few of her favorites. She handed us hot washcloths and brought glasses of water and tiny cups of lime-ginger sorbet to cleanse our palates, then gave us some time to ponder the menu. The sorbet, by the way, was delicious, with just a hint of ginger.

We decided to order off the menu rather than go with the chef’s tasting menu for two, so we could pick and choose between the many, many dishes. Our sushi chef, Yoshi, kept us laughing and eating all night. 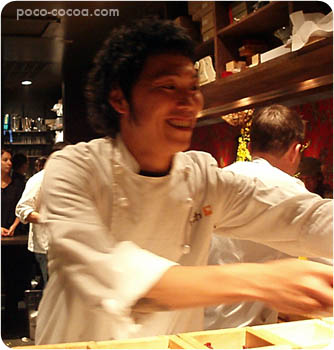 Our first dish was the Uchiviche, a fantastic take on ceviche made with citrus marinated striped bass, salmon, vine-ripened tomatoes, yellow bell peppers, cilantro, garlic and thai chilies. The fish was so fresh, with just a hint of citrus and a sprinkling of golden raisins. I had been worried that I might not enjoy so much raw fish, but after one bite of this, I was hooked. 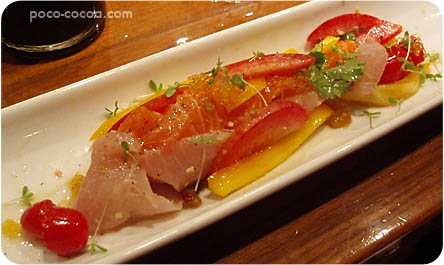 Next we ordered the Brie Tempura Ringo Canape, tempura fried morsels of wonderful brie with a sweet apple chutney and lightly fried sweet potato chips. This dish was amazing. Actually, I should just stop saying that, because EVERY dish was amazing. 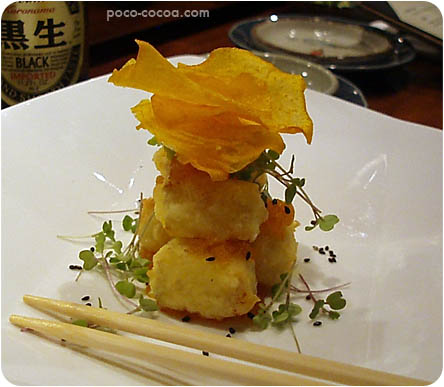 We each ordered a bit of sushi, the uni (sea urchin) for me and the binnaga (seared albacore) for Justin. We popped them in our mouths before I remembered to take a photo, but be assured that they were also beautifully plated. I was a bit nervous about the sea urchin, but I tried it anyway…Yoshi described it as tasting “just like the ocean,” and I agree. I was taken aback by the texture, much like an aerated mousse, a bright orange mouthful of the sea. Justin loved his seared tuna, fresh, clean, and delicious.

Yoshi recommended we try the Aji Tataki next, fresh Spanish jack sashimi from the sea of Seto, Japan. It was served with fresh okra, yellow bell peppers, golden raisins, pine nuts, a slice of a Japanese fruit that I can’t remember the name of, and a delicious soy broth. I was amazed that each dish could be better than the one before…the flavors in this dish were astounding, and the fish was…perfect. 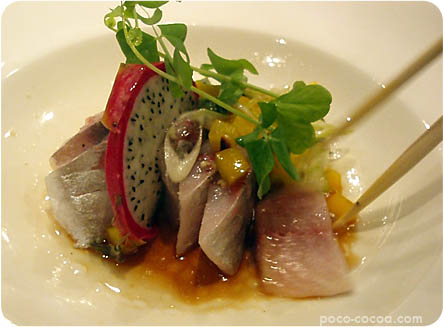 We decided to order a few more plates…Erin noted that my next dish might take 15 minutes or so, and recommended I have a bite of sushi while I waited for it. So I had the binnaga, and I whole-heartedly agree with Justin’s love of the seared tuna. Justin had a cup of miso soup with shiitakes to “tide him over” before his next dish as well. 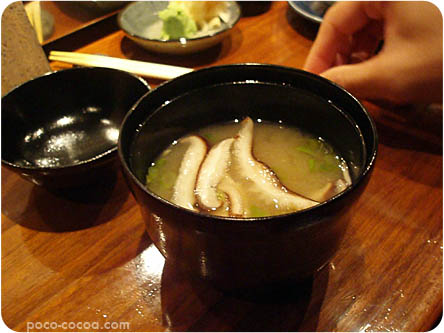 Justin ordered the Crunchy Tuna, a spicy bluefin tuna roll with avocado, warm tempura flakes, and a balsamic reduction. Yoshi made sure this one was especially spicy, just for Justin. The tempura flakes around each roll gave a surprising crunch, and the sauces were fabulous. 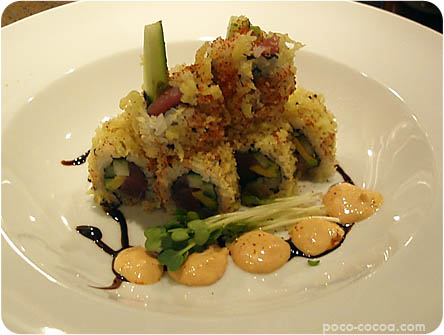 I ordered the Kamo Kaki at Erin’s recommendation, which was crisp Moulard duck breast with chanterelles and cinnamon-pear butter. Ohmyga…the duck had a crispy skin and was tender in the middle, melding perfectly with the strong, earthy chanterelles and sweet butter sauce, and the sliced golden beets at the bottom were a nice surprise. 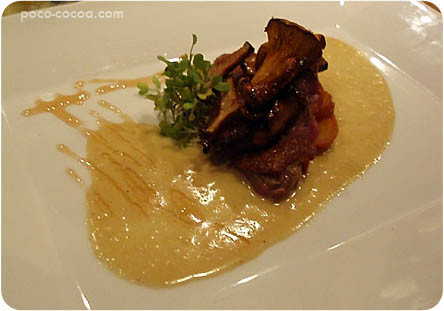 We ended the meal with Chai Tea Creme Brulee, perfectly smooth with a top so caramelized it was coffee-like. 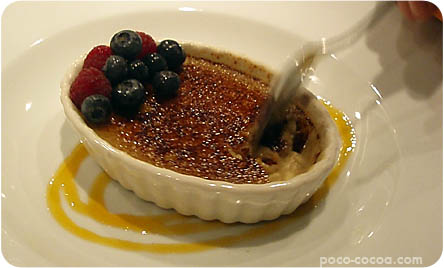 I can’t say enough good things about this place. The service was excellent, the food was insanely good, the atmosphere was fun and inviting…Tyson Cole (below) has definitely created something fabulous. 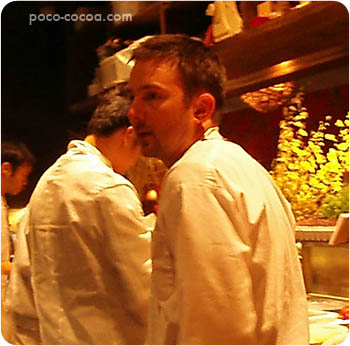