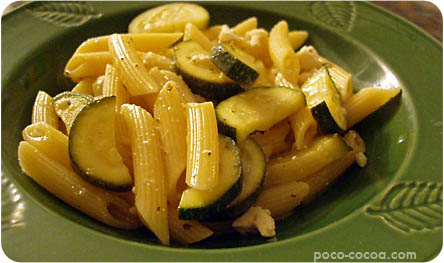 Allow me to bring you yet another sauceless pasta from the poco-cocoa kitchen. This one is so fresh and bright, with lots of lemon flavor and salty feta cheese. It’s very quick and easy…note to self: this is a great weeknight dish!

Yesterday was Justin’s birthday, and it was laid-back, easy-going, and lots of fun, just like him. We watched movies at home (Looking for Comedy in the Muslim World…which I do NOT recommend, it was horrible), took a nap, and walked to Whole Foods for dinner and dessert. Chad and Lindsay happened to be out and about nearby, and met us there for a leisurely meal. We talked, ate, talked, ate, and talked. Then Justin and I walked home in the cool night air, stopping at Waterloo Video to pick up Elizabethtown (I think we’re going to watch it later on tonight).

We also watched Friends With Money this weekend, which I had been wanting to see forever. It wasn’t the chick-flick upbeat comedy that I thought it would be, but it was still great. It was happy, sad, frustrating, and just plain real. I really enjoyed it.

The most interesting thing we did this weekend was finding a lost kitty. He was in the park near our home, crying constantly, acting skittish, following us around. After petting him a bit, we noticed that he was really skinny, and I asked Justin to call the number on his tag, just to make sure he wasn’t lost. He did, and it turns out he’s been missing for three weeks! His owner’s home was just a block away, but he somehow didn’t make it there. We carried him over and were so happy to see his reunion with his owner. The kitty (named Toonces) ran to his owner, and the owner was just breathless with excitement. It was great, and I’m so glad we made the phone call.

And now, the pasta.

Penne with Zucchini and Feta

Cook pasta according to package directions. Drain and keep warm.