Cool dinner from the farm 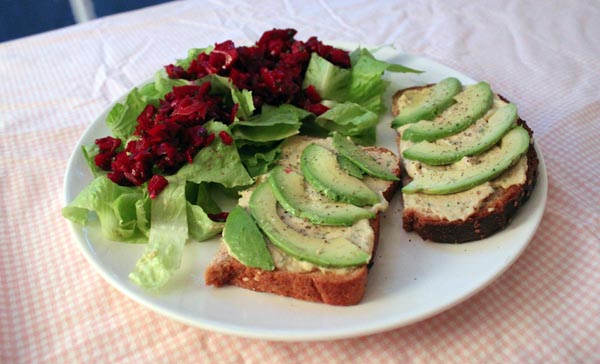 Tonight I whipped up a no-cook dinner to use up some Farmhouse produce. After nearly dying of heat last night when I cooked dinner (the A/C had been off all day, so it was already warm, then I used three burners… did I mention we have a TINY apartment? And that it’s already above 90 degrees in Austin?), I wanted to keep it cool tonight.

I don’t really have a recipe… I used Mark Bittman’s idea in his Kitchen Express book for the beets. I tossed a couple of tiny onions (you can use shallots) and some peeled beets in the food processor and pulsed until they were chopped. I made a quick vinaigrette with olive oil, red wine vinegar, Dijon mustard, salt and pepper, then tossed the beets with it and a bit of minced chives. Then I spooned that on top of some chopped romaine lettuce.

I made little open-faced hummus sandwiches and topped them with sliced avocado, kosher salt and black pepper. For the hummus, I whirled some chickpeas, olive oil, tahini, cumin, salt, garlic and chickpea liquid in the food processor until smooth.

It was so nice to have a full dinner without turning on the oven or stove! I think it’s time to ask our landlords if we can use their grill… that would help keep things cool in the house. Though I’ve never really grilled before, so it would be an adventure. 🙂