A need to knead 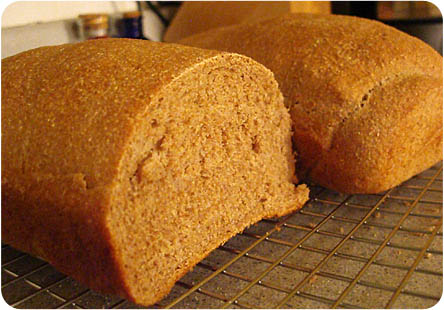 Last week I was asked to bring bread to a dinner at Chad and Lindsay’s. Rather than buying a specialty loaf from Central Market or Whole Foods, I decided to make my own. I used to bake bread once a week, usually using this recipe from the original Laurel’s Kitchen.

I bought this little paperback wonder years and years ago for fifty cents at a library book sale. I fell in love with Laurel and her hippie ways, her sprouts and breads and beans. I read the first chapter over and over again, especially the part where Carol Flinders describes the lunch that Laurel prepares for her husband…a big wicker basket filled with sandwiches (“thick slices of dark rye around an egg salad sparked with sweet red peppers and parsley”), a thermos of barley soup with a tiny packet of grated cheese, a salad of lettuce and cherry tomatoes with a tiny bottle of herb dressing, half a cantaloupe with zigzag edges filled with cottage cheese and toasted sunflower seeds, peanut butter-seed cookies, a scored orange, a thermos of decaf coffee, and a thermos of hot malted milk spiked with a protein supplement.

Oh my! I was in love with the idea of eating whole foods, and lots of them. I wanted to bake my own bread and boil my own beans, grow my own vegetables and cook with love. I remember the first few weeks post-Laurel, with lunches of my own egg salad on homemade bread, pasta salads, fruit…Justin and I would sit together in his car and share lunch in between my hectic summer school classes. It was lovely.

Since then, I’ve mellowed out a bit, but I still love the idea of cooking with love. I really believe you can taste the difference between food that’s been prepared haphazardly or in a rush, following a rigid recipe or while multitasking, and food that has been lovingly washed, sliced, and cooked, slowly and with care. This Thursday we’ll be watching Like Water for Chocolate (one of my favorite food flicks) with some friends, and I look forward to revisiting the images of how emotions can be shared through food.

So anyway, the bread. This is Laurel’s most basic recipe, and my favorite by far. I love that there are so few ingredients…the simplicity of the recipe really lets you appreciate the flavor of the bread. I’ve also kneaded in sunflower seeds or herbs, rehydrated sun-dried tomatoes or onion flakes…feel free to add whatever sounds good to you. The loaves generally end up being shorter and denser because of the whole wheat flour, but it’s still heavenly.

Pour the warm water into a large bowl. Add the sugar and sprinkle the yeast on top of the water. In a few minutes, when the yeast comes bubbling to the top, stir in half the flour and beat very well, until the dough ceases to be grainy and becomes smooth and stretchy.

Add the salt and remaining flour cup by cup, mixing well. Knead it in the bowl until it is no longer sticky, then turn it out onto a floured board.

As the dough gets gets stiffer and harder to knead, sprinkle the remaining flour a little at a time on the board and knead the dough on top of it. Knead, push, and fold until the dough is soft and springy to the touch (usually at least 8 to 10 minutes…set at timer so you don’t stop too early). Spray the bowl with cooking spray, then plop the dough in, turning to coat both sides. Place the dough round side-up. Cover the bowl snugly with plastic wrap or a dish towel, and let rise in a warm place until doubled in bulk (usually 45 minutes to an hour).

Punch dough down; let stand 5 minutes. Spray two loaf pans with cooking spray. Divide dough in half; roll each half into a rectangle, then roll up the dough, jelly-roll style, pinching the edges to seal. (Roll the dough tightly to avoid air pockets.) Place the loaves into the pans, cover, and let rise once more, until doubled in bulk (usually about 45 minutes).

Toward the end of this rising period, preheat the oven to 375ËšF. When the bread is rounded just above the rim, bake it for about 40 minutes. When you remove it from the pan and tap the sides or bottom, it should sound slightly hollow. The color should be a rich golden brown. Allow the bread to cool, then slice and serve.

Asian for a day