Cleaning out the fridge 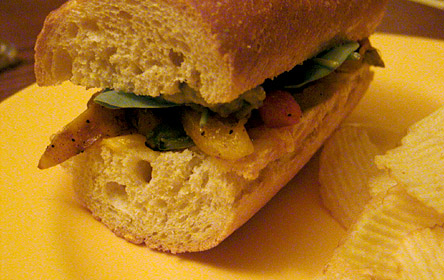 I just love cloudy, rainy days. They just feel cozy and a little more closed-in, like the sky is coming in close for a hug.

After last week’s quick meals and dinners out, we were ready for some home-cooked goodness. We had a few veggies left from last week that I didn’t want to waste, so I came up with this sandwich last night. It actually turned out to be delicious, and I may have to plan for it again soon.

Roast both bell peppers and the Anaheims either under the broiler or over a gas flame. Allow to cool slightly. Peel the peppers, remove the stem and seeds, and coarsely chop.

Sprinkle the cheese on the bottom halves of the baguette pieces. Bake in a 375Â°F oven for 5 to 10 minutes, or until cheese is melted and bread is slightly crispy. Spread the peppers over the cheese, and sprinkle with a bit of salt and pepper to taste. Lay a few spinach leaves on top of the peppers. Spread the top halves of the baguette pieces with the mashed avocado, and set on top of the sandwich.