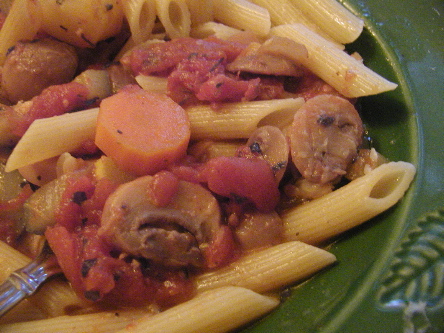 While we were in college, Justin worked at a nearby inn as an innkeeper’s assistant. He served breakfast and dinner, cleaned rooms and made reservations. He enjoyed it, although the owner of the inn was not the greatest person to work for. He met Peggy there; she was the chef.

Some nights when there were leftovers, he’d bring me little containers of Peggy’s signature dish, Penne with Primavera Sauce. If I was lucky, I also got a piece of grilled baguette. I loved that sauce. I asked him to get the recipe from her, and he tried. He brought me a yellow piece of paper with his crazy handwriting all over it, notes that didn’t make much sense. I asked him for more information. He had none. The primavera sauce remained a dream.

Then one day, in my political science class, I noticed a woman sitting up front, and people were calling her “Peggy.” I mustered up my courage and walked up to her and asked, “Are you the Peggy that works with my husband at the inn?” Amazingly, she was. We talked and quickly became friends. She explained to me one day before class, scribbling notes over the same yellow piece of paper, how to make her primavera sauce. I was thrilled.

It turns out that Peggy was also a nutrition major. She had been a chef at various restaurants before, and had decided to come back to school and become a dietitian. I admired her for that. School was hard for her; she struggled through classes and studied endlessly, with her messy notes and loaded backpack. We ended up taking organic chemistry together, and once she spied my pristine, color-coded, perfectly illustrated notes, she asked if I would tutor her. So I did. I helped her understand why hydrogenation makes fats solid, how double bonds worked, and how the Krebs cycle produced energy. We spent hours in the library, poring over notes and discussing lectures, and eventually, we became close friends.

After graduation, we ended up in the same dietetic internship class, and helped each other through the tough, tiring rotations. When the internship was over, she moved to St. Louis, and we said our goodbyes. I lost her address. I lost her.

Peggy inspired me. She was full of energy, eager to learn, and amazing in the kitchen. I miss her. This one’s for Peggy, wherever she may be.

Notes: Peggy says you can use fresh or dried herbs. I usually serve some up for dinner, then freeze the rest in plastic bags for easy reheating later.

Heat olive oil in a large pot over medium heat. Add onion, garlic, celery, and carrot, and saute briefly until onions are transparent. Add basil, oregano, and bay leaves, and saute 1 minute. Add tomatoes and their juices, crushing them with your hands as you add them to the pot. Add mushrooms and vermouth or red wine, and stir. Bring to a boil, cover, reduce heat, and simmer for one hour. Add zucchini and squash, and simmer for 30 minutes more. Serve over pasta with freshly grated Parmesan cheese.