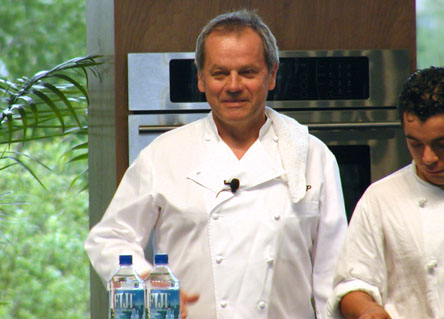 Two whole days of gluttony on the shores of Town Lake…what more could you ask for? Justin, Leti and I rode our bikes to the festival on Saturday, and spent the first part of the day getting oriented. There was so much to see, hear, and eat!

The music stage boasted bands such as Fastball, South Austin Jug Band, Kelly Willis, and The Gourds, and next to it, the Central Market Cooking Stage hosted chefs from Central Market doing cooking demos. The biggest stage was the Saveur stage, on which Wolfgang Puck, Tyler Florence, and Todd English showed their stuff. The Flavors of Texas tent offered cooking demos from local chefs as well as wine tastings from local wineries. There was a book-signing tent where the celebrities could hang out and meet fans, and booths from Starbucks, Central Market, and Stubbs offering snacks or meals (although Starbucks was the coolest, because they gave away free cups of Frappuccinos and lemonades). The Gathering of Wagons area was hosted by the Texas Beef Council, and offered dishes from local chefs featuring…you guessed it…beef. And finally, The Big Taste was a huge row of tents housing vendors, restaurants, and wineries that gave out samples of their wares.

Saturday afternoon we watched a short demo from the chef/owner of La Traviata (the Italian restaurant we took my niece Kourtney to on her 14th birthday). She showed how to make her Bolognese sauce, which she uses in her lasagna at the restaurant. We got to sample some, and it was sooooo good! It takes 8 hours to cook, and includes veal, pork, beef, and bacon, so I doubt we’ll be cooking it any time soon, but we’ll definitely be visiting La Traviata again. We also sampled a wine from Grape Creek Vineyard, and though I can’t remember which one it was, it was pretty good (meaning I didn’t wrinkle my nose too much).

We checked out the beef section, and tasted chili, sausage, barbecue, and short ribs. We made our way to the Big Taste, and sampled chocolate silk pie and key lime pie from Dave and Busters, kettle corn, pheasant terrine (yuck), chocolate dipped strawberries, focaccia, a Columbian soup from Dona Emilia’s (we are sooo going there soon), smoked salmon, onion jam, Thai noodles, iced coffee, hibiscus lemonade, numerous wines, and lots of other things I can’t remember. Afterward, we were stuffed, so we sat down to listen to Kelly Willis for a bit before riding back home. 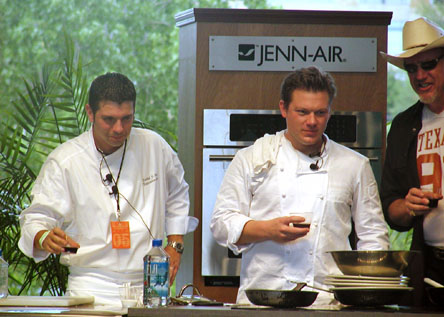 Sunday was a little more relaxing. We got to the festival a little earlier and staked out great seats in the Saveur tent. First was Wolfgang Puck, cooking up his Mongolian Lamb from his restaurant, Chinois. He was very entertaining, told a lot of jokes, and seemed like a nice guy. The lamb (pictured above) was sooo good. Yes I ate lamb. Yes I ate Leti’s, too. 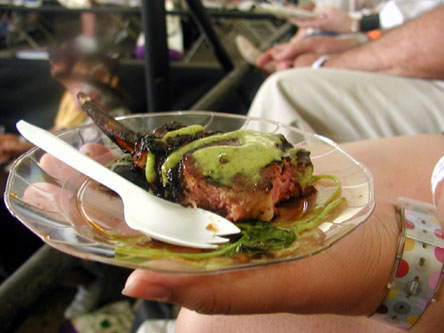 Next up was a showdown between two celebrity chef/local hero teams. On one side was Tyler Florence and Mayor Will Wynn. On the other was David Bull (chef at the Driskill) and Ray Benson. The two chefs got a basket of goodies they had to use to come up with a couple of dishes in about 30 minutes. There was a lot of cheating, a lot of trash-talking, and a whole lot of fun going on. Although Tyler Florence definitely was a crowd-pleaser, it was David Bull’s team that won the showdown. 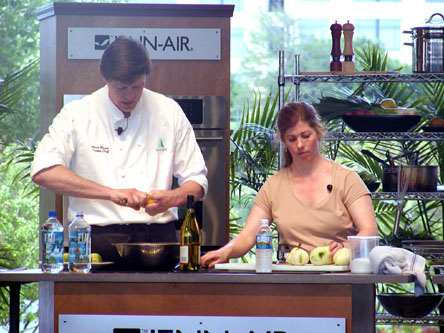 We stayed to watch Claudine Pepin and her husband, Roland Wesin (chef at Rivers Restaurant in Portland, Oregon) create potato blini with apple compote and cured salmon. They were fun to watch, but the sample was just so-so.

After this, we headed back to the Big Taste for more chocolate silk pie, plus bacon-wrapped shrimp from the Oasis, scrumptious dark chocolate-chambord fondue with pound cake, brownies, and strawberries from the Melting Pot (another place we want to visit), more kettle corn, sticky toffee pudding, and a few other things that again, I can’t remember. We stopped at the beef spot again to taste sausage, then sat down to watch the Gourds belt out some tunes.

All in all, the festival was a lot of fun, and I’ll know next time to stick to the Saveur tent for well-planned, entertaining demos. I’ll also wear sunscreen.

Most of the food was great, some of it was not so great, and I’m guessing a lot of the wines were good (but since I’m not a wine-drinker, I can’t say for sure). I ate so many animals this weekend, but I did say little prayers for them and tried not to waste a bit of them. Which probably explains my stomach ache on Sunday night…

A day in the life of a happy person

My love-hate relationship with my computer