It’s all about the sauce 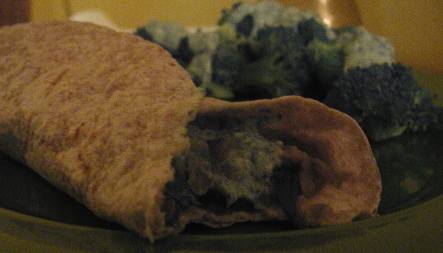 This was another dinner request from Lindsay…what’s funny is that we couldn’t remember what the recipe was, where I had found it, or when we had eaten it, but we both remembered the sauce. Garlicky and super-flavorful, this sauce is great spooned over anything…not just these burritos. We spooned it over the burritos and some steamed broccoli the first night, used it as a salad dressing the second night, and spread it on falafel sandwiches the third night.

I finally located the recipe in an old issue of Cuisine at Home. I changed it quite a bit, and the recipe that follows is my version.

Saute onion, curry powder, and jalapeno in oil in a nonstick skillet over medium-high heat. Cook until onion begins to brown, 5 to 8 minutes, stirring often. Stir in broth, tomatoes, potatoes, lentils, and bay leaves. Reduce heat and simmer, uncovered, until lentils are tender, 20 to 30 minutes. Add spinach and stir until wilted; add lime juice and salt.

Heat the tortillas in a nonstick pan, in the oven, or over the flame until soft and pliable. Fill with lentil mixture and spiced yogurt.

Process all ingredients except yogurt in a food processor until minced. Stir herb paste into yogurt; chill until ready to serve.

5 responses to “It’s all about the sauce”