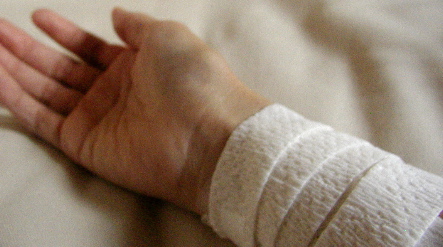 I somehow knew I should have stayed in bed this morning. I woke up a little late, which meant no time for breakfast. So off I went, hungry and sleepy, to cook breakfast at the B&B. I put the quiche and the raspberry almond strata in the oven, then the sheet pan full of bacon. Not long afterward, I came back from the dining room to find the kitchen filled with smoke. One piece of bacon had burned, but you would think I had set fire to the whole place, there was so much smoke. So I opened a window and took out the bacon, and went about preparing the rest of breakfast.

I noticed that the quiche was cooking very slowly, and was a little nervous that it wouldn’t be done in time (several of our guests needed breakfast a little early–7:00). I pulled out the strata and increased the temperature a bit to encourage the quiche to finish cooking. The strata was a new recipe, one I had created on the fly, and it didn’t look all that great. I was disappointed.

I served all of the breakfast except the quiche, which was slowly, slowly firming up. I finally decided to pull it out, 10 minutes late, and check it for doneness. I grabbed the quiche with one hand, I guess a little too forcefully, and the whole thing flipped over and spilled all over the inside of the oven and the floor. My first thought was, “Great! Now what am I supposed to serve these people?!” My second thought was, “Great! Now I have to clean the oven, and the quiche bits are already burning and making more smoke!” My third thought, and the thought that stays with me even now, was “Ouch!”

I hadn’t even noticed, but the quiche flipped onto my forearms, and the quiche pan landed on my wrist. So here I was, quicheless, with fairly large burns on both arms, in pain, and trying not to freak out. I grabbed a bag of frozen raspberries and tried to apply it to the burns as I cleaned up the major part of the mess and started making scrambled eggs. At this point, my boss came in to help me…she was more worried about the burns than the breakfast, but of course I was just upset that I had ruined a quiche.

The rest of the morning was filled with several fumblings, dropping forks and stumbling into things. I also happened to write “Blueberry-Almond Strata” on the blackboard, when it was actually a Raspberry-Almond Strata. I failed miserably at being a capable cook today, and it was no fun at all. Near the end of my shift, Myles, the cutest dog ever (belonging to my boss), started shaking uncontrollably and having some sort of seizure. So my boss took him to the vet while I finished up. No news yet on how he’s doing or what went wrong.

I went straight to my neighborhood pharmacy when I got off work, and the pharmacist helped me find some burn ointment and second-skin patches to put over my arms (just have to say that I LOVE my neighborhood pharmacy!). I was dreading taking a shower, because I knew the hot water would seriously hurt the burns, but I HATE cold showers. Let me just say it was a quick one. I’m not even sure if I got all the conditioner out of my hair. I jumped out of the shower and immediately dressed my wounds and attempted to take a picture. It’s not easy to do left-handed, so it’s not really clear, but there it is. And yes, my other arm is bandaged identically.

But, after that horrible morning, things couldn’t get much worse, so I’m anticipating a wonderful, happy day. I watched A Midsummer Night’s Dream on television, I’m excited that my niece is coming to stay with us tomorrow, it’s beautiful and cloudy outside, the cidadas are singing, I have two fudgy brownies waiting for me (courtesy of my friend Lindsay), and it’s almost the weekend. It’s going to be a lovely day.