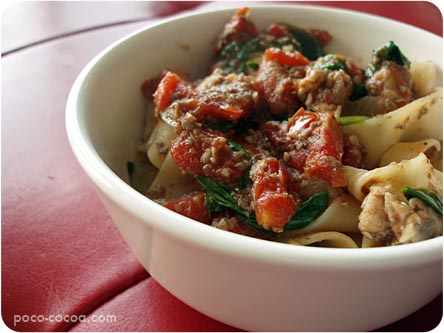 So last night I made this dish, another delicious one from Gourmet magazine (though it didn’t elicit the emphatic oohs and aahs from Justin that the Sole Amandine did). The sauce has a meaty texture, not from the little pieces of chicken, but from the finely chopped mushrooms that mix so easily into the tomatoes and coat every strand of pasta just so. I changed a few things, of course, and in the future, I’d probably leave out the chicken and top it with a hefty grating of Parmesan cheese. Me and cheese, we get along really well.

In other news, we’re going to the Oyster Club Launch Party this weekend, and I’m so excited about it. There will be lots of fresh Gulf oysters, lovely drinks made with local liquors, great music, and even a pool. It’s still warm enough in Austin to swim at night, but we may end up just dipping our feet in. I think we’ll be too busy enjoying the food and music to care much about the pool. It is a beautiful one, though.

And next week, we’ll be going to La Dolce Vita for the first time! I’m excited about this one, too…great food and gorgeous art, for an entire evening.

And then! After that, the Austin Film Festival begins. I’ve been trying to scope out the movies, to create my viewing schedule for the week. Justin and I may end up watching some of the same films, but there are always a few that I’m interested and he’s not, and vice versa. I’m thinking of avoiding the big films like Max Payne, since those will be in major theaters soon, and focusing on the independent films that I may not get a chance to see again. Maybe I’ll watch lots of short films. Or girly films. Or horror films.

I do love October.

Pappardelle with Chicken and Mushroom Ragu

Pulse mushrooms and garlic in a food processor until finely chopped.

Heat oil in a large skillet over medium-high heat until it shimmers. Season chicken with 1/4 teaspoon salt and 1/4 teaspoon pepper and cook, stirring occasionally, until just golden, about 3 minutes. Transfer with a slotted spoon to a bowl.

Reduce heat to medium and cook onion, stirring occasionally, until softened, about 3 minutes.

Add vinegar and cook until evaporated. Add chicken and tomatoes (with juice), then simmer, stirring occasionally, until sauce is just thickened, about 15 minutes.

Add spinach to sauce and stir until wilted. Stir in drained pasta and cook 1 minute.