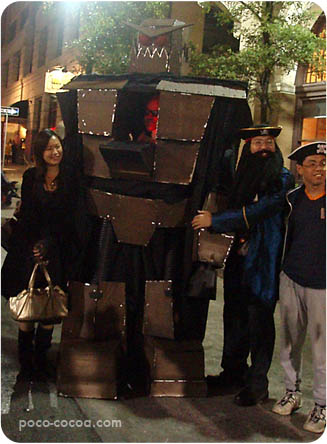 Each year I promise myself I will find a costume to wear on Halloween…it’s possibly my favorite holiday…and each year I somehow procrastinate until October 31st, and end up dressed as myself. This year was no different. But next year! Really!

Last night we walked downtown to 6th street to check out all the costumes and to catch our friend Bud, who creates an amazing costume each year. Two years ago he was a spooky scarecrow, with a removable pumpkin head, a gory face, and long, long legs…he walked on stilts the whole night. Last year he was a headless horseman, with a full-size horse and rider (his actual head was a “beheaded” one that the rider was holding).

And this year…he was Robo-Bud. This costume was enormous…of course everyone loved it, and gathered for photos in front of him. He had a little window where his head was (as the robot’s “controller”), and teeny tiny hands that he’d wave at people. It was a heavy costume, though, and he was exhausted after walking just a block or two. He looked amazing, though!

I took photos of some of the crazy costumes we saw on 6th street…it was hard to keep it clean, though, as many people (females, mostly) choose to use Halloween as a reason to walk down the street clad in lingerie and French maid costumes. Ah, well.

I hope you all had a fabulous Halloween, with lots of candy and maybe a stomach-ache or two. 🙂

One response to “That was Halloween”