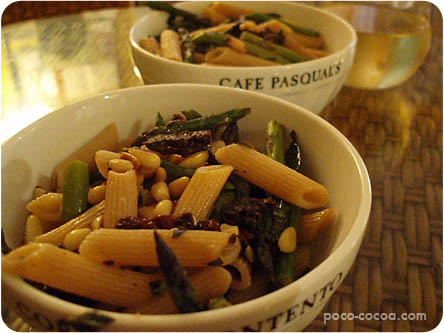 This dish was sooooo good. I was a little skeptical at first…I thought it would be dry and the flavors would be weak, but I was wrong. The deep earthiness of the sun-dried tomatoes really balances out the freshness of the asparagus. And the pine nuts! Oh, but they’re delicious. The pasta was still great the next day, too…it would be a great dish to pack up for lunch.

The original recipe called for fusilli (corkscrew pasta), but I found whole wheat penne and decided to go with that. It worked out well…sometimes the pine nuts would snuggle into a penne and you’d get a special treat. I also used dried tomatoes and soaked them in just-boiled water for about 10 minutes to rehydrate them. I toasted the pine nuts in a dry skillet over low heat for a few minutes.

Preheat oven to 450ËšF. Toss the asparagus with 1 tablespoon of the olive oil and place on a lightly oiled baking sheet (lined with foil for easy cleanup). Roast just until tender, 6 to 8 minutes. Remove from the oven and set aside.

Cut the tomatoes into 1/4-inch-wide strips and set aside.

Cook the pasta in a large pot of boiling salted water, stirring occasionally, until al dente, 8 to 10 minutes.

While the pasta is cooking, heat the remaining 2 tablespoons olive oil in a large skillet over medium heat. Add the garlic and cook, stirring, until fragrant, about 30 seconds. Add the roasted asparagus, tomatoes, and salt and pepper to taste. Reduce the heat to low and keep warm.

Drain the pasta and place in a large, shallow serving bowl. Add the asparagus mixture, basil, and pine nuts. Toss to combine.