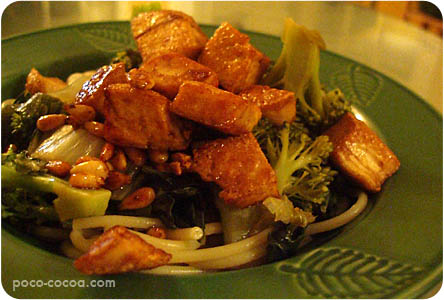 Friday nights are a bit stressful here in our little kitchen. It’s the night that we realize that we haven’t used up our CSA produce, and that we’ll be picking up another full load in the morning. We open the fridge, pull out all the produce, and see what we can make of it.

This time I made a kind of Asian noodle dish…I wish I had measured proportions so I could give you a real recipe, because it was delicious! Basically, I sauteed some garlic in a little olive oil mixed with a bit of sesame oil, then added a head of chopped bok choy, some broccoli florets, a bit of powdered ginger (we were out of fresh), a can of vegetable broth, and a few squirts of soy sauce. I cooked that until the veggies were crisp-tender.

Meanwhile, I made my basic Honey-Glazed Tofu recipe, increasing the amount of sriracha and adding in pine nuts just before adding the honey mixture. I served all this up on some cooked spaghetti tossed with a little sesame oil. Justin loved this so much that he ate three huge bowls of it…I thought he was going to make himself sick, but he was equal to the task.

We have more bok choy this week, and I think I’ll be making this dish again. I’ve noticed that I’ve strayed from using recipes recently…I haven’t been perusing cookbooks much, and when I do, I file an idea somewhere in my brain, and create something kind of like it. I need to be writing these down, though…if I make this dish again this week, I’ll make an effort to record amounts and update the recipe. Enjoy this cold, cloudy Monday! (What? Isn’t it cold and cloudy where you are, too?)