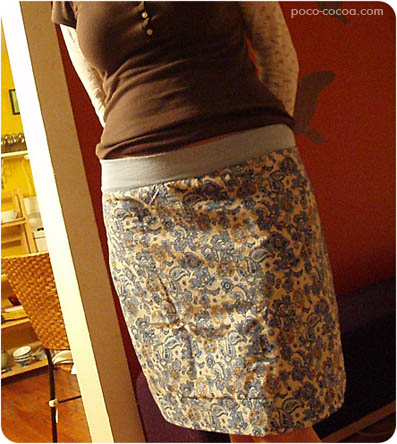 Saturday night Shara, Leti, and I got together for some craftiness and general girlie fun. Shara brought delicious snacks…mimosas, baguette, Nutella, and Brie. I had a pot of lentil soup on the stove, and we ate, talked, laughed, and crafted.

We’ve been considering starting a website to sell a few of our handcrafted goods. Shara’s an excellent knitter and seamstress, Leti’s amazing with jewelry, and I’m…well…I’m a little good at a lot of things. We decided to have a sewing night every so often to get an idea of how long it would take to make things, and how much work it would be.

Shara decided to sew a skirt with a stretchy waistband like the one I made last week. She used a bit of Justin’s t-shirt (he didn’t wear it anyway) to make the waistband, and used a blind hem on the bottom. It turned out really cute! I cut and pinned an apron for Leti, but I have yet to sew it. It’s going to be gorgeous if I can ever get it done. I’m much more of a planner…measure this, pin that, draw it out…while Shara just cuts and sews.

Roux decided to get involved, too…he was the only boy allowed in the fun. Justin and Rob (Shara’s boyfriend) were having Halo Night at Rob’s place, playing Halo 2 on multiple screens with multiple X-Boxes. We girls joked that the boys were at Nerd Night, until I realized that we were also having a Nerd Night of sorts. It’s Saturday night! Let’s sew! What can I say? I’m a nerd.