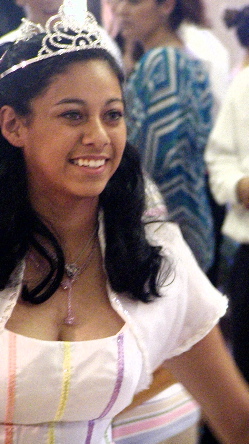 This is my niece, Kourtney, who just celebrated her quinceanera on Saturday. Unfortunately, I was having so much fun that I forgot to take pictures, so this is the only one that I have (and Justin took it!).

Kourtney’s quinceanera started with a mass at the Catholic church. The mass was much like any other mass, except that the church was beautifully decorated with white roses. Kourtney and her court of honor (much like bridesmaids in a wedding) entered the church in a procession, with Kourtney being escorted by her mom (my sister) and dad. The girls’ dresses were so pretty; some girls wore pink, others lilac, and others yellow. During the mass, the priest gave a homily about the possible origins of the quinceanera. Apparently there were ancient Aztec traditions for coming of age ceremonies for young girls, and the priest also linked the celebration to the Jewish bat mitzvah.

Kourtney received lots of gifts for this celebration; not just wrapped presents and birthday cards, but also traditional gifts specially chosen for the ceremony. During the mass, relatives and friends came forward to present the gifts to her and have them blessed by the priest. Justin and I gave her the necklace, and others (including my parents, my brother, and various aunts and uncles) presented a ring, a rosary, earrings, a bracelet, a crown, a pillow, a bible, and several other gifts. All of these are symbols of Kourtney’s entrance into womanhood, and the affirmation of her faith.

After the mass, everyone gathered for the reception. Unlike many weddings, in which the reception might include dancing, in the Mexican tradition, these events are separate. So the reception began in the late afternoon, and everyone was treated to homemade dishes and music chosen by the DJ. My parents and family made a lot of the food, and it was delicious. The main dish was asado, traditional for weddings and quinceaneras, which is pork simmered in a red chile sauce. There were also pinto beans and Spanish rice, potato salad, and bread. The tables were decorated with flower topiaries and candles (all made by my family), as well as little bowls of bizcochos, crumbly anise-flavored cookies that are rolled in cinnamon sugar. These cookies make an appearance at all our family celebrations.

After the reception, we had a little break before the dance started. To start the dance, Kourtney and her court (10 girls with their escorts) are introduced and take part in La Marcha (which guests are also welcome to take part in). La Marcha is a traditional dance that leads the dancers across the floor in different formations, including one where couples form a canopy by clasping hands above their heads, allowing other dancers to duck under a tunnel of arms. It’s difficult to explain, but fun to do. After that, Kourtney danced with her father, her grandfathers, her godfather, and her little brother. I was doing pretty well until her little brother, Gary, came out to dance with her. After that I just cried and cried.

From then on it was a free for all, dancing and gettin’ jiggy. There was a cake-cutting ceremony and a “champagne” toast (it was actually pear cider), and we had so much fun.

So I apologize for the lack of pictures, but hopefully my other family members will share their own photos with us soon, so that I can share them with you. Happy birthday, Kourtney!