Life with a Teenager 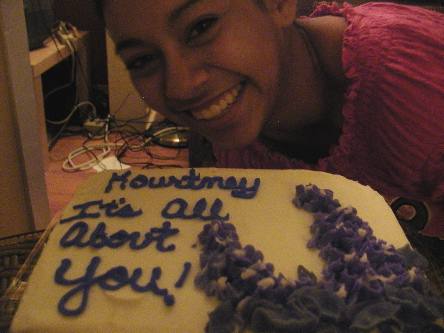 Sunday was my niece’s 15th birthday. We celebrated by having an indoor picnic with Chad and Lindsay, with food from EZ’s. We had birthday cake from Central Market, and listened to the symphony at the park in the evening. It was a fun day, and I was glad that Kourt was able to spend it with us.

It’s been fun to have a young adult here, listening to music for hours on end, quizzing me on the identity of various musicians, and watching old game shows on TV. It makes me feel a little bit older…not “Old” exactly, but older. I realize that I would never want to relive those high school years, even though mine were fairly easy; I would never want that constant anxiety and fear about what others think and who is with who and who is my friend and what I will wear. My worries now seem much grander, saving for retirement, whether to fix my 10-year-old car, paying bills, but for some reason my worries seem so superficial compared to how I felt as a teenager. I don’t envy her, but it sounds like she’s having a great time.

Unfortunately, I haven’t been cooking much, because we seem to find some reason or other to eat out instead. For example, Monday night was pizza night, in celebration of Justin’s promotion at work. Hooray! It is well deserved, and I’m so glad his company is starting to realize his talent. Last night was Girl’s Night with Leti, which meant dinner at Whole Foods. And tonight? Well, hopefully tonight we’ll make spaghetti and garlic bread, but then again, Austin Java offers half-price appetizers on Wednesday nights…

I promise, soon I will have something food-like to post. Soon.

3 responses to “Life with a Teenager”