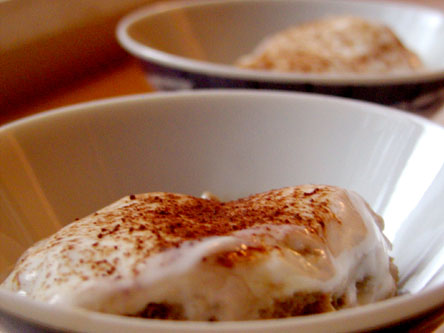 Tiramisu is an Italian dessert that is traditionally light and airy, made of ladyfingers or sponge cake dipped in a mixture of coffee and marsala wine, then layered with creamy mascarpone cheese and grated chocolate. Tiramisu literally means “pick-me-up”, and it’s one of Justin’s favorite desserts. I decided to make an easy, Americanized version at home to use up some ricotta that we had in the fridge. The result was creamy, sweet, and reminiscent of (though not as rich or perfect as) versions Justin has tried in restaurants.

I did change the recipe a bit (when do I ever follow a recipe exactly?). It calls for Kahlua, which I don’t have at home, and which wasn’t available at the grocery store. I wasn’t about to make a trip to a liquor store for an expensive bottle of something I may not use again, so I used coffee instead. I used instant, because we don’t have a coffee maker, and just dipped the ladyfingers in it. Next time, I think I will just drizzle the coffee over the ladyfingers in the dish, because they absorbed so much coffee that it was a bit too liquidy. It may be the type of ladyfingers I used, though (I found them in the bakery section of HEB)…they were very soft and airy. A stiffer cookie would work better for dipping. Justin loved it, and as it was super-easy to make, he’ll probably get this treat often.

Combine the first 3 ingredients in a food processor; process until smooth.

Split the ladyfingers in half lengthwise. Arrange 24 halves in a single layer in an 11×7-inch baking dish. Drizzle with half of Kahlua, and let stand for 5 minutes. Spread half of cheese mixture evenly over ladyfingers. Repeat the procedure with remaining ladyfingers, Kahlua, and cheese mixture. Sprinkle with cocoa.

One response to “A quick pick-me-up”