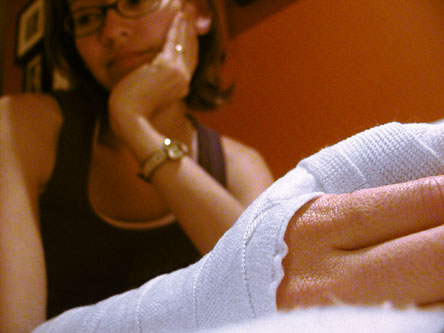 I guess that’s what I get for making fun of Justin’s broken thumb. I went to the orthopedist today, and after poking and prodding my wrist, he found a tender spot and decided I needed x-rays. He thinks that I might have fractured some obscure little bone in my wrist, and decided that I needed a splint for about three weeks. I thought, “Oh, a splint, that’s not so bad, Justin had one and he could take it off every now and then.” Then the nurse said, “Lay down on the table.” I knew it was going to be bad after that.

He wrapped it all up and put some goopy stuff on it and rattled off the “rules of cast-wearing”…do not get it wet, do not stick objects in it to try to scratch anything, do not hit things or other people with it.

I thought about appealing to his emotions, trying to explain that I’m claustrophobic and that I would possibly go crazy and rip it off at some point, that it really didn’t hurt that bad anyway and that I promise to keep it very still…but by then it was done and my fate was sealed.

I don’t even know how I hurt it. My friends and I have three theories:

At any rate, I’m tired from pecking at the keyboard and worried that I won’t be able to work tomorrow (how am I supposed to wash dishes or empty the huge coffee pot or slice cantaloupe or even wash my hands??!?), so I think I’ll take my little Robo-cop arm to bed.

4 responses to “So, really, no more monkeys jumping on the bed.”