Here’s my haircut! Taking this photo reminded me that I used to take a daily photo at Daily Mugshot. I might start doing it again, because I’m vain like that. 🙂 Actually, it’s neat to see how my hair/clothes/home changes over time, too. 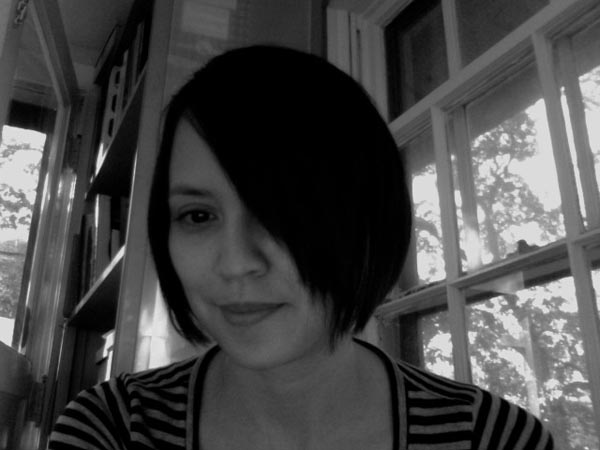 Last night we had SUCH a great time. We walked downtown and had a drink and deviled eggs and sweet fried shrimp at the bar at Lamberts, and we met up with my friend Jason. We hadn’t seen him in three months, so it was great to catch up. Then we walked to Imperia and sat in the bar and had a drink and some edamame and some nigiri (mmmm, fatty salmon). We played a game with the waitress called “Guess what this leaf is on the bottom of the plate.” Justin even tasted it to see if he could figure it out. It was bamboo. I don’t think you’re supposed to eat bamboo. The waitress gave us free sake as a prize for Justin’s bravery. Then we walked over to Annie’s Cafe and had a drink and a calamari salad. We hadn’t been there since my friend David stopped working there. It was still good, but not as wonderful as when David was behind the bar. Then we walked home. I think walking-restaurant-hopping dates are the bomb.

Today I ran a bajillion errands and Justin attempted to fix the dishwasher. It didn’t work, so I think we’ll be hand-washing for a while. I like the idea of getting rid of that big piece of machinery in our kitchen – we don’t have a built-in dishwasher, it’s a little portable one, and it takes up precious counter space. I already have plans for that counter space…

Tonight we’re going to drive around town in my friend Jason’s old jeep. We might go to Mount Bonnell and check out the view from the top. And then we’ll go to Dairy Queen, because Jason loves Dairy Queen. I think I will get an Oreo Blizzard, in honor of my dad, who loves Oreo Blizzards.

Justin is having knee surgery on Monday. He tore his ACL a couple of months ago, and we thought he could get by without surgery, but he’s just not able to play basketball and tennis, two things that he loves. So surgery it is. I’m nervous, because he’ll be under anesthesia, and he’s not so great with anesthesia. Also, he’s very stubborn and I’m worried he will push himself too hard too soon. I have no idea how I’m going to get him up the stairs after the surgery. Of course he thinks it will be no problem, because he’ll be just fine and dandy to hop up the stairs that day. We’ll see.

This is my new favorite video EVER. I’ve watched it like eleventy-one times already. I just love the way she talks.

I hope you’re having a wonderful weekend!