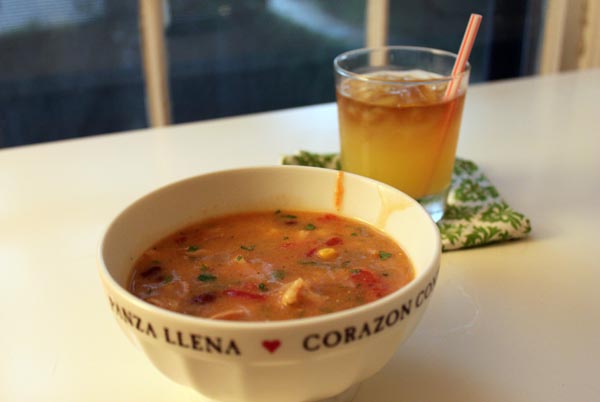 We made this a while back… Yes, I know it’s a weird mish-mash of cultures to have enchilada soup with mai tais. Still, it was yummy. I wanted to use up the leftover cooked chicken we had, and found this recipe in my Evernote. I am currently in a Southern/Home Cookin’/Crockpot/stir-in-a-can-of-cream-of-mushroom-soup phase. As for the mai tais, we got a similar recipe from a really cool couple we met in Jamaica, and we fiddled with it until we liked it.

In other news, I’m sick. 🙁 I woke up kind of achy yesterday, and a little nauseous, but managed to forget about it. But then I woke up the same way today, plus feverish and with muscle aches X 2. I had big plans for this weekend, including a hike on the Greenbelt and swimming at Sculpture Falls, but alas, it was not meant to be.

I did watch Ironman 2 on Friday… it was fun, and I do have a crush on Tony Stark (see previous post) and a girl-crush on Scarlett Johansson, but the story was still kind of janky. And where did Don Cheadle come from? What happened to Terrence Howard? Weird.

Speaking of randomly replacing someone in a film series… I also saw the newest trailer for Eclipse, and I have to say, I’m underwhelmed. Kristen Stewart’s wig is at its worst; I am not happy with Bryce Dallas Howard as Victoria (I want Rachelle back! Also, Bryce’s wig is hideous!); the vampires’ makeup looks worse than in the first film. Meh. Don’t get me wrong, I’ll still watch it on opening night, but meh.

Wow, quite the grouch today, aren’t I? Maybe we should move on to the recipes. 🙂

Heat the oil in a large soup pot over medium heat. Stir in the onion and garlic; saute until softened, about 5 minutes. Stir in the broth, chicken, black beans, tomatoes, corn, salsa, jalapeno and chili powder; heat to simmering.

Source: The Farm Chicks in the Kitchen.

Stir all except dark rum with ice in a cocktail glass. Top with the dark rum.

Makes 1 drink that will remind you of Hawaii. Or Jamaica.