So I made a couple of sandwiches this week, and one was spectacular and one was just okay. 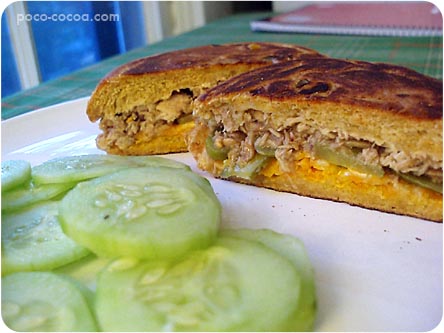 It’s a riff on the regular old tuna melt, but the tuna mixture includes such loveliness as balsamic vinegar and fresh basil. Then it’s spread on a bun with mayo and mustard and sliced pickles and cheese, and grilled to perfection. This sandwich will definitely be a repeat around here.

This one, not so much: 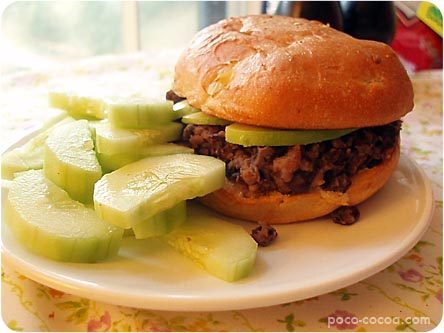 I was disappointed, actually, because the recipe was from Rick Bayless, who I adore. And the flavors were fine, but there was something sad about the lack of crunch or firmness in the sandwich… it’s a mix of chorizo and black beans, spread over a bun with goat cheese, avocado, lettuce and jalapenos. I wanted to stuff some tortilla chips in there to add some texture. So while it tasted fine, I doubt we’ll make it again. Here’s the recipe, in case you’re curious.

I recently subscribed to Food & Wine, and I’m really enjoying it… I think it’s nice just to switch things up every now and then. I used to get Cooking Light, then switched to Bon Appetit, then Gourmet, and Saveur, and now Food & Wine. Actually, I get Gourmet, Saveur and Food & Wine. They’re all so different to me… Saveur’s articles are unbeatable, Gourmet’s ideas so inspiring, and Food & Wine’s recipes so usable.

Anyway, here’s the recipe for the spectacular sandwich. I used grated Colby-Jack cheese instead of the Swiss, and Hatch hamburger buns instead of the ciabatta. And bagged tuna instead of canned. And less butter for cooking. But other than that, I kind of followed the recipe! 🙂

3 responses to “Sandwiches and sandwiches.”