I love me some cake. Preferably homemade, and preferably chocolate. Last week was one of my boss’s (I have several) birthdays, so I decided to bake up a cake. I opted for Orangette’s Winning Hearts and Minds Cake. 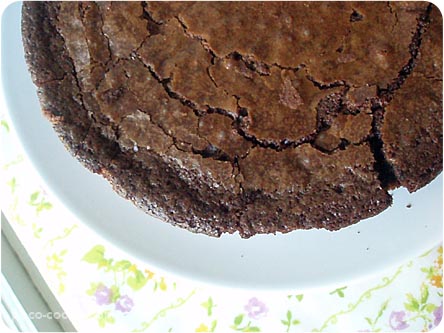 Isn’t it pretty? I actually baked two of them, in an attempt to allow as many people as possible at work to taste it. But once those cakes were baking, the entire place filled up with this amazing chocolatey aroma, and Justin said, in his cutest voice, “Do you really have to take BOTH cakes to work?” Of course not. Of course one would stay home, where we would dig into it when it was still warm and gooey, and ooh and aah and be happy that we’re alive.

So it’s a good cake… insanely rich and sweet. The crust is crispy, the inside dense and fudge-like. As I was baking it, I would periodically come in to the living room and show Justin the ingredients… “Are you sure it’s supposed to have THAT much butter?” “Just how many eggs is that?!” And finally, “Where on earth did you get this recipe?!” There’s a lot of butter. And eggs. And chocolate. And not much else. 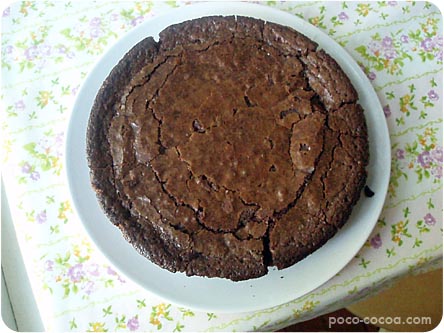 My only complaint is that there was somehow a custard that formed on the bottom of the cake. Like an upside-down flan… a slightly gooey, caramely, sugary custard layer. I think I’d scrape that off next time, just so it looks better. Otherwise, it’s a marvelous cake.

**As an aside, my boss called it “brownies.” And I suppose it is brownie-like… dense and fudgy and comforting. 🙂