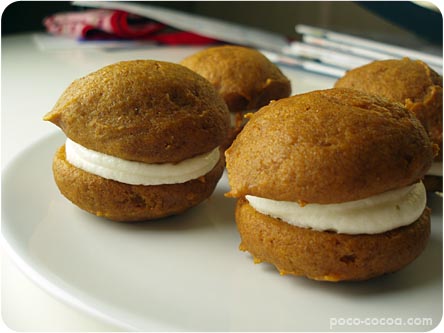 Okay, people. This is the recipe you’ve all been waiting for: Pumpkin Whoopie Pies.

I’ve been coveting Baked: New Frontiers in Baking for a while now, and today I FINALLY drove myself to the bookstore and bought it. I’m so excited! Every recipe in the book looks fabulous, and if they’re even half as delicious as these whoopie pies are (I originally saw this recipe on Martha Stewart’s website), I’ll be ecstatic. Perhaps I should warn my co-workers about the potential onslaught of home-baked goodies I’ll be bringing to work. 🙂 I mean seriously…Root Beer Bundt Cake? Butterscotch Pudding Tarts? Hazelnut Cinnamon Chip Biscotti? Please. I plan to bake every recipe in this book. (Never mind that Justin and I are trying to eat healthier…this is why I’ll be showering my co-workers with this stuff in the near future.)

So these little treats are fun to make. They take some time since you have to bake them in several batches, then assemble them, but they’re soooooo worth it. The cake is perfectly moist and pumpkiny, and the cream cheese filling is decadent and smooth.

I did make some adjustments (surprise)…I used cinnamon and a bit of pumpkin pie spice instead of the cinnamon/ginger/cloves mix called for in the recipe. I always use extra cinnamon because I LOVE my cinnamon…I swear, it’s the best thing on the planet. Also, the book states that the recipe yields 12 whoopie pies…no way. Using the exact-sized scoop they called for, I ended up with about 32. So if you’re not planning on sharing with quite a few people, you might want to cut the recipe in half. (For your own sake…trust me, you’d eat the whole batch if you could.)

For the Cream Cheese Filling:

In a large bowl, whisk the flour, salt, baking powder, baking soda, cinnamon and pumpkin pie spice together and set aside.

In a separate bowl, beat the brown sugar and oil together with an electric mixer until combined. Add the pumpkin puree and beat to combine thoroughly. Add the eggs and vanilla and beat until combined.

Sprinkle the flour mixture over the pumpkin mixture and beat until completely combined.

Use a small scoop with a release mechanism (this is important, so that the shape of the cookies turns out right) to drop heaping tablespoons of the dough onto the prepared baking sheets, about 1 inch apart. Bake for 12 to 14 minutes, until the cookies are just starting to crack on top and a toothpick inserted into the center of a cookie comes out clean. Let cookies cool for about 5 minutes, then transfer to a cooling rack. Continue baking batches, keeping cookie dough in the refrigerator while each batch bakes.

Sift the confectioners’ sugar into a large bowl. Add butter, cream cheese and vanilla, and beat until smooth. Be careful not to overbeat the filling. (The filling can be made 1 day head. Cover the bowl tightly and keep in the refrigerator. Let filling soften to room temperature before using.)

Spoon filling into a ziploc bag (or use a piping bag with a large tip), press out the air, seal, and snip off a bottom corner to make a piping bag. Pipe about a tablespoon of filling onto each upturned half; top with another cookie, flat side down, and press down slightly so that the filling spreads to the edges of the cookie. Repeat until all the cookies are used. Refrigerate for at least 30 minutes before serving. The whoopie pies will keep for up to 3 days in the refrigerator.