Hope everyone’s holidays were safe and lots of fun. We’ve been busy running here and there and doing this and that, but we took time out on New Year’s Eve to have a luxurious dinner at Asti with a group of friends. It was so much fun! There were balloons floating to the ceiling, complimentary glasses of delicious prosecco, great food, wonderful wines, and fun conversation. Here’s a short rundown of our good eats:

We started with Arancini, balls of risotto and cheese that had been deep fried. They were fabulous, and made us all hungry for our fist courses. Justin had a leek and gnocchi soup that was so smoky and wonderful, and I had a seared sea scallop (shown above) with a bit of buttery sauce, black truffles, and fennel. The scallop was perfectly cooked, and I liked that the fennel was soft and sweet. 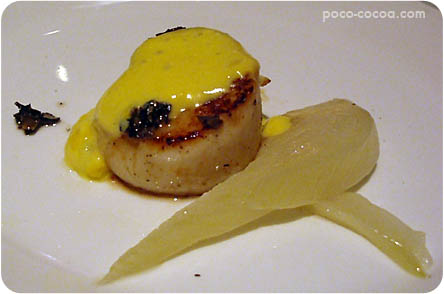 Next came the salads…Justin had a salad of local spinach and fried gulf oysters with pancetta, orange, and shallot-tarragon vinaigrette. It was so perfectly balanced, with just a hint of orange to brighten up the deep-fried oysters. 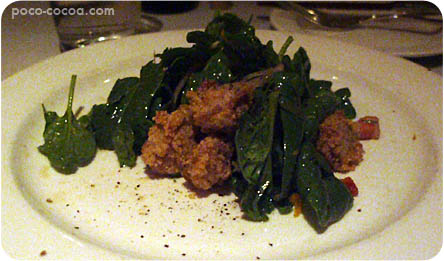 I had the escarole and prosciutto salad with walnuts, lemon juice, olive oil, and pecorino romano. I was disappointed in this dish…it was oversalted. The prosciutto and romano are already quite salty, and the sour-salty dressing was just too much. 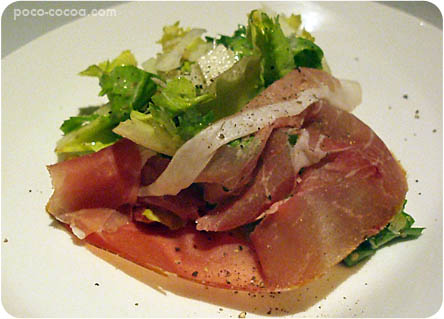 The pasta course was next…Justin had a delicious tagliatelle dish with truffles and cream, and I had a fabulous shrimp crespelle with ricotta, bechamel and garlic breadcrumbs. The spicy lobster-tomato sauce that accompanied it was perfect.

Our entrees were hit or miss…Justin’s rotolo of spinach, butternut squash and ricotta was outstanding. My lamb chops were good, though a bit too rare for my taste. The fingerling potatoes and crispy artichokes were great accompaniments, but the portion was too large for a fourth course. It was a bit intimidating, and unappetizing at that time, to have a plate full of meat.

I chose the chocolate creme brulee for dessert…a combination of two of my favorite sweets! It was smooth and delicious. The Nutella and goat cheese focaccia sandwich that came alongside it was an unnecessary addition that really added nothing to the dessert. 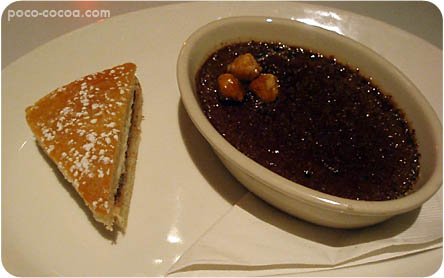 Justin enjoyed chestnut crepes stuffed with chestnut and orange mascarpone and caramel-orange ice cream, but I thought the flavor was icky. It tasted of bad eggnog to me. 🙂 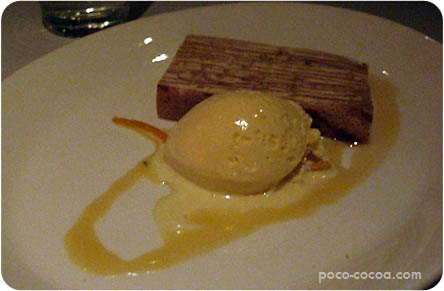 Others in our group had cheese plates for dessert, which came with a fruit compote and cracker bread. I hear that one of the cheeses was dredged in black truffles, a nice touch.

Justin and I shared a half-bottle of Seghesio Sonoma Zinfandel, our current favorite among red wines (it’s so buttery and smooth), and had a cappuccino and a latte at the end of the meal. Overall I was pleased with the experience, and though a few of the dishes weren’t stellar in my book, I was glad to see the chef taking risks and trying new things.

We had a great time, and a great meal!