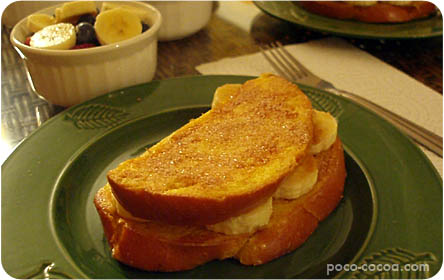 Yesterday we spent the day with Leti, who has just returned from a two-week vacation in Costa Rica. We listened raptly as she told us about close calls on horseback, cliff-side winding roads, and monkeys outside her thatched-roof hut. She brought back Costa Rican coffee straight from the plantation and lots of photos of her adventures. The first week of her trip was spent at a yoga retreat, while the second week entailed zip-lining through the jungle canopies. Someday soon I think I’ll need to have an adventure.

So after long hours of chatting and walking to Whole Foods and watching Pan’s Labrynth (again), we decided to have breakfast for dinner. I whipped up this French toast, which I used to make sometimes at the B&B, and we had fruit salads to go with it. I’ll have to remember how quick and easy breakfast can be…whether in the morning or for a weeknight dinner.

Whisk eggs together with soymilk in a shallow bowl; set aside. In a small bowl, mix together sugar and cinnamon; set aside.

While pan is heating, dip bread slices in egg, soaking both sides. Cook in pan, two at a time, until golden brown. Flip over; while the second sides are cooking, place banana slices on one slice of bread. Once both slices of bread are golden brown, top the banana slices with the second bread slice. (Is that confusing enough?) Place on a plate and immediately sprinkle liberally with cinnamon-sugar. Serve with pancake syrup, if desired.

Now it's time to say goodnight...