An ode to Giada and DVR 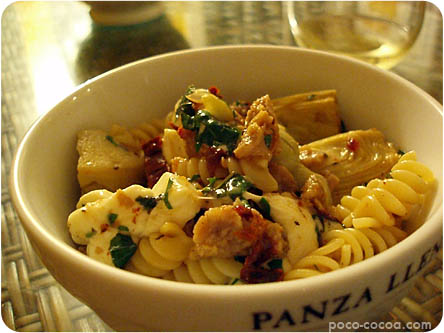 So we have DVR…did I already tell you that? It’s so exciting…I watch so much less television now, and only the shows I’m really interested in. I record Everyday Italian, and I can fast forward through the recipes I don’t like, or delete the shows I’ve already seen. I’ve got Gourmet’s Diary of a Foodie on PBS (an AMAZING show, by the way) and Nigella Feasts, plus various PBS specials and HBO films, and I’m set up for future Iron Chef episodes and Jamie Oliver’s new travel channel show. I love it! Justin’s been recording NOVA and football and Survivorman, and each night we just flip through, check things out, and watch only what’s really good. So thank you, my lovely landlords, for setting it all up!

It makes such a difference to me when I see a recipe made on television versus just seeing it in print. I will often overlook a recipe of Giada’s, for example, but after seeing her make it on her show, it seems more do-able, more accessible somehow. I watched her make this sausage-pasta dish, for example, and it looked so easy and so good that I had to try it out myself (with soysage, of course). The dish was really good, though next time I’d use canned artichoke hearts, cut into smaller pieces, instead of the frozen ones (they seemed a little bland and very big). I adapted and halved the recipe a bit for Justin and me, and we still had lots of leftovers.

Did anyone catch Nigella Feasts today? It was all about chocolate. Oh my, that cake she made looked divine. I think I’ll try it the next time I’m invited to a potluck. Or maybe I’ll just make it tomorrow and eat it all myself.

Heat the oil reserved from the tomatoes in a large skillet over medium-high heat. Add the soysage and cook 2 to 3 minutes, crumbling with a potato masher or a wooden spoon. Add the artichokes and garlic to the skillet and cook 2 minutes more. Add the broth, wine, and sun-dried tomatoes. Simmer over medium-high heat until the sauce reduces slightly, stirring occasionally, about 8 minutes.

Meanwhile, bring a large pot of boiling salted water to a boil. Cook fusilli until al dente, about 8 minutes. Drain the pasta and add to the soysage mixture along with Parmesan, basil, parsley, and mozzarella. Toss until the sauce is almost absorbed by the pasta and season to taste with salt and pepper.