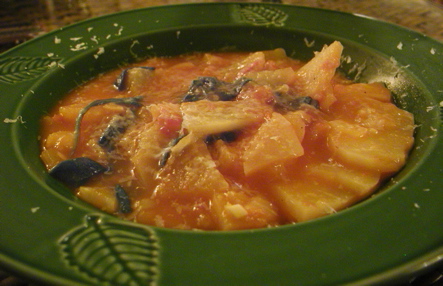 This is one of my favorite soup recipes, because it’s quick and easy, and reminds me of my mom’s caldo. I’ve made it several times before, always using Swanson vegetable broth, and it turns out brothy and soupy. This time, I tried an organic vegetable broth from Whole Foods, and the soup ended up thick and stew-y. It seemed like a brand new soup.

I noticed a definite difference when I was pouring the broth into the pot…it looked opaque and almost chunky (it grossed me out a little). But it made me think…have I been so used to super-processed foods, including broth that is so watery it can’t possibly have much flavor, that I have no idea what the real stuff looks or tastes like? This broth was flavorful, but the viscosity of it just wasn’t what I was hoping for. I feel a little embarrassed that I prefer the mass-produced thin stuff.

Anyway, as I said earlier, this soup is very easy to pull together…a perfect weekday dinner.

In a deep pot, saute garlic and onion in olive oil for 2 or 3 minutes. Add broth and bring liquid to a boil. As you slice the potatoes, add them to the broth. Cook potatoes 20 minutes, stirring occasionally. The potatoes will begin to break up and thicken the broth as the soup cooks. Stir in spinach in bunches as it wilts into the soup. Season sopu with nutmeg, salt, and pepper. Stir in tomatoes and heat through, 2 or 3 minutes. Top each serving with cheese.