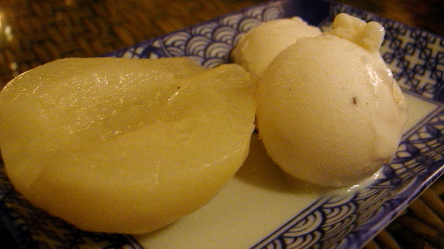 Okay, maybe I should preface that by saying that normally, I do NOT like pears. Maybe it’s just awful memories of elementary school cafeteria lunches with horrible mushy enchiladas and a side of canned pears. Yuck! They’re grainy, they’re soft…they’re like apples that have just gone amiss. I’ve always wanted to snack on a fresh pear. It just looks so cool to hold a perfect pear and take a big bite out of it. But ew.

How simple! How fantastic! How yummy! This recipe just amazes me, because it doesn’t call for any special wine, not even any sweetener…it just seems to bring out all the goodness in pears that has been hiding from me until now. The texture is perfect: soft enough to eat with a spoon, but not soft enough to remind me of grade school. I served the pears with a couple of tiny scoops of Stonyfield Farm Vanilla Frozen Yogurt (in itself a great find, with it’s not-too-yogurty-taste and 0 grams of fat), which was lovely. But even better, the next day, I drizzled them with chocolate syrup. What fruit is not made better with a bit of chocolate? What food, for that matter?

At any rate, here is the recipe that changed my life. Well, it changed my attitude toward pears, at least.

The soup that has everything