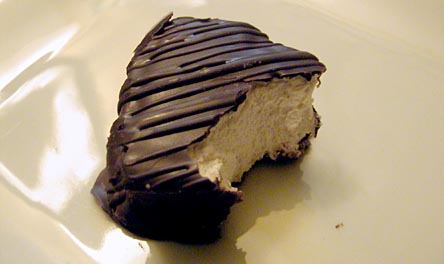 We’ve had such a wonderful weekend. Justin’s been on vacation since Thursday, so we’ve been riding our bikes and watching movies and eating, eating, eating. This evening we walked to Whole Foods to get some more coffee beans for Justin’s weekday coffee fix. He chose a French Roast, which is filling the whole apartment with its dark aroma.

I chose this chocolate covered marshmallow for my daily chocolate fix. The marshmallows from Whole Foods are so fluffy and light, and the chocolate they’re dipped in is dark and smooth. It’s a perfect mix. This one was heart-shaped before I took my first bite.

On another note, soup season is officially here. Not because it’s cooler outside (it’s not), but because the Soup Peddler (David) says so. Every week we choose a soup or two, and he delivers it to our front porch by bicycle. Well, he used to. Then he hired more bikers, and now he has trucks. His business has expanded so much in just a few short years, and at first I was a little saddened to lose the authenticity and weirdness of it all, but now I’m happy to have more options for quick and easy dinners. Next week he’s bringing us my favorite, Bouktouf. It’s a pureed zucchini-lemon soup that is so simple, yet so delicious. It reminds me of the flavor of the caldos my mom used to make. I was happy to see that the recipe for Bouktouf is included in David’s new book. I also ordered a quart of Bouillabaisse. I’ve never ordered it before, but it sounded good.

Tomorrow, it’s back to work for both of us, so I’m off to prepare a little something for Justin’s lunch, which I’ll post soon.