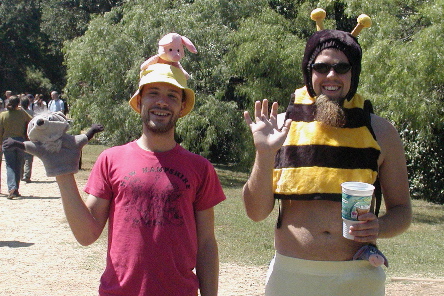 Yes, Austin is the live music capital of the world. Yes, it’s full of parks and trails for hiking and biking. Yes, it’s urban and cool and full of well-to-do professionals. But…it’s also full of hippies!

This weekend we went to Eeyore’s Birthday Party at Pease Park, just a couple of blocks from our home. The party started 42 years ago, and every April, Austin’s finest gather together for food and drink (all to help fund nonprofit organizations), live music, costume contests, drum circles, maypole dancing, hula hooping, and people watching.

The air is full of rhythmic beats from the drum circle, where anyone with a percussion instrument is invited to join in while others dance and sway to the beat. It was a little weird to me at first, with the smell of illegal substances in the air and abundance of broom skirts, peasant blouses, and bare feet. It didn’t take long for me to love it, though…I could feel the beat of the drums roll up from the ground and resonate in my head.

Chad and Andy decided to wear costumes to the party. We thought they looked adorable. Andy entered the costume contest, but the winners turned out to be scantily clad ladies in medieval garb and men with homemade robot suits.

People watching was definitely the coolest part, though. Lindsay and I had a blast pointing out costumes (intentional or not) and oddities among the laid-back, left-leaning Austinites who strolled by.

There were plenty of food booths, selling everything from bruschetta and veggie burgers to aguas frescas and beer. Justin and I shared a perfectly sour pickle and a chocolate ice cream cone before deciding to head home for the day.

So happy birthday, Eeyore, wherever you may be!

These, my friends, are loquats.